Patrick McGavin breaks down three things you should know about area girls soccer including an intriguing matchup between Metea Valley and Waubonsie Valley. 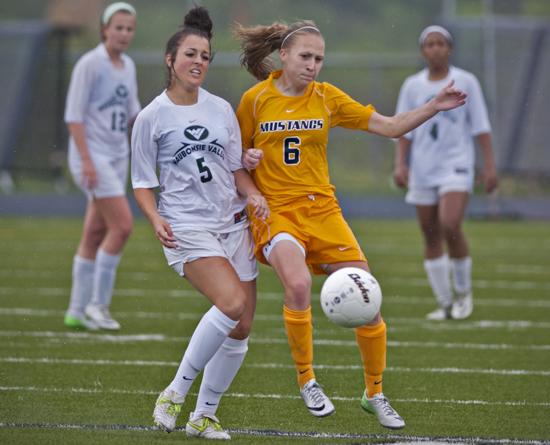 Jori Romano (5) of Waubonsie Valley and Alena Sidwell (6) of Metea Valley collide as they go for the ball. | Jon Cunningham/For Sun-Times Media

1. Metea Valley confronts top-ranked and district rival Waubonsie Valley in the championship of the Class 3A Naperville North Sectional Friday uncertain about the availability of star forward Jenna Kentgen.

The  leading scorer in school history injured her knee in the first 12  minutes of the No. 6 Mustangs’ 1-0 sectional semifinal win over  Plainfield North on Wednesday. Kentgen was scheduled to visit the doctor on Thursday.

The two schools played to a 1-1 draw on April 5th. Metea Valley has never beaten Waubonsie Valley in girls soccer.

2. The last two Public League teams standing, No. 17 Northside and No. 18 Payton, square off at Winnemac Friday afternoon in the finals of the Class 2A Amundsen Sectional. Northside  is playing for its first ever sectional title.

3. With one week remaining in the season, the top three candidates for Player of the Year are: New Trier senior forward Maddie Mulford, who led the No. 2 Trevians to the PepsiCo Showdown championship and a runner-up
Naperville Invitational finish; Waubonsie Valley senior Kristen Dodson has 23 goals for the top-ranked Warriors; Barrington junior Jenna  Szczesny won the Gatorade Illinois Player of the Year award and has 28 goals and 15 assists. All three players are playing in the sectional finals today.