News and notes from around the Aurora area, including Mooseheart's Mangisto Deng and Makur Puou both signing with Vincennes University. 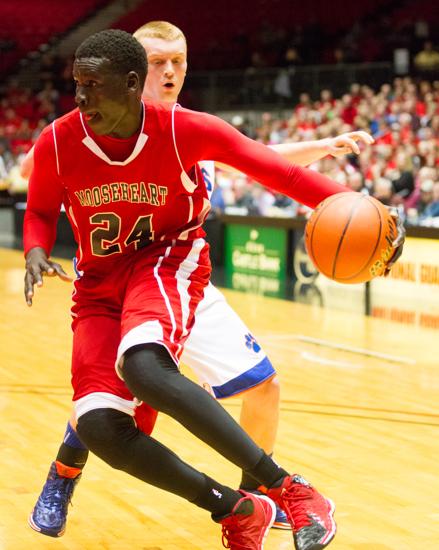 Seniors Mangisto Deng and Makur Puou, who helped lead Mooseheart to the IHSA Class 1A State title in March, are taking the next step in their development as basketball players.

The two teens who came to Mooseheart in 2011 from South Sudan, each signed a National Junior College Athletic Association letter of intent this week with Vincennes University at a ceremony at the school gymnasium in front of the student body, which numbers 230.

“All the hard work we put into our basketball games has paid off,” Deng said. “I’m happy to wear a Vincennes jersey. I’m looking forward to going there and doing whatever it takes to help them be successful.”

Vincennes is a NJCAA Division I program that is coming off 33-4 and 34-3 seasons in which the Trailblazers reached the Final Four of the national tournament. They finished third this past season and nine sophomores are moving on to Division I programs.

That’s the dream of 6-7 Deng, an athletic wing, and 6-10 Puou, an athletic post player with superb shot-blocking skills.

Both players are scheduled to graduate at the school’s 96th Commencement on Saturday and will travel to Vincennes, Ind., to begin summer school two days later.

“I’m not scared about it,” Deng said. “I’m ready to work. I’ve been waiting a long time and I can’t wait to go to college.”

Deng and Puou were joined by 6-5 Keith Mack of Chicago North Lawndale in signing with the Trailblazers.

Landing the two Red Rambler teammates was called “huge gets for the Trailblazers,” according to coach Todd Franklin in a school news release.

Both are rated mid-major plus to high major prospects by all scouting services, it said.

“Without Mooseheart, this would not have happened to us,” Puou said. “It is unbelievable, the work they have put in to help me.”

Vincennes, Indiana’s oldest university, was established in 1801 and is 75 miles southwest of Indianapolis.

One of the first shootouts of the summer, the 2014 Tomcat Classic, will be held this weekend at East Aurora.

The 10-team event will include the hosts, Aurora Central and Aurora Christian as well as Peoria Central, King, Springfield and Proviso West, among others.

Games will begin at 10 a.m. Saturday and continue through 3 p.m. On Sunday action begins at 9 a.m. and continues through the early afternoon with a single-elimination tournament.

The 6-5 Griffin, bothered recently by a bruised toe, is playing AAU this spring with Milwaukee-based Wisconsin Playground Elite.