In the Class 4A Lake Park Regional semifinals, 12th-seeded Lake Park scratched out a 4-3 upset win over fifth-seeded Geneva to head to Saturday’s 11 a.m. regional title game against another upstart West Chicago. 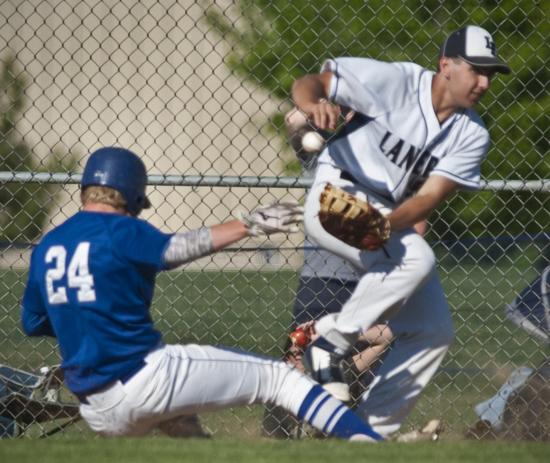 But in the playoffs, it’s a clean slate, and this time the Lancers found a way to win a game.

In the Class 4A Lake Park Regional semifinals, the 12th-seeded Lancers scratched out a 4-3 upset win over fifth-seeded Geneva to head to Saturday’s 11 a.m. regional title game against another upstart team, West Chicago.

“When you’re 13-22, you take what you can get,” Colucci said. “We’re coming in as the underdog. We have the mentality that the record is 0-0. The pressure’s not on us because we’re playing higher seeded teams.”

In a 3-3 tie in the top of the fifth, Lake Park drew four walks to score the eventual winning run. Gunnar Barlund drew the fourth walk, which forced in Anthony Gallina.

“We didn’t die,” winning pitcher Rhett Rapshus said after Geneva tied the game with three in the bottom of the third. “It would have been easy for us to quit right there and roll over. But our team knows that this is the playoffs and anything can happen. We just went out and scratched one out.”

Rapshus took care of the rest. The senior would not be denied. He struck out five, walked three and allowed two soft hits in the complete-game effort, throwing 99 pitches in the process.

“That one inning, we struggled a little bit,” Colucci said. “He got a little amped up. We got lucky getting out of that inning with three, to be honest with you. He settled down after that. I was really happy with the way he threw today.”

The Lancers set the tone with a three-run top of the second. Three singles, an error, a hit batsmen and a fielder’s choice led to the unconventional three-spot.

Geneva (20-15) took unconventional to a new level in the bottom of the third, the Vikings’ three-run comeback inning. Two errors, two walks, a hit batsmen and an infield single resulted in their three runs.

“We knew going in we were going to see that kid (Rapshus), who is very good,” Geneva coach Matt Hahn said. “We know they’re very well-coached. We know they’re in the DVC. It wasn’t going to be a true 12 seed. The scoreboard shows it.”

It’s the ninth time in 10 seasons that the Vikings won 20 games. But more than what was accomplished on the field; Hahn said his team’s support as his son Drew has gone through cancer treatment stands out.