Ryan Nutof initially impressed with his bat by blasting a first-inning, opposite-field solo home run, before firing a one-hitter for five innings as South Elgin hammered Wheaton North by the slaughter rule, 10-0, in Thursday’s Class 4A Hoffman Estates Regional. 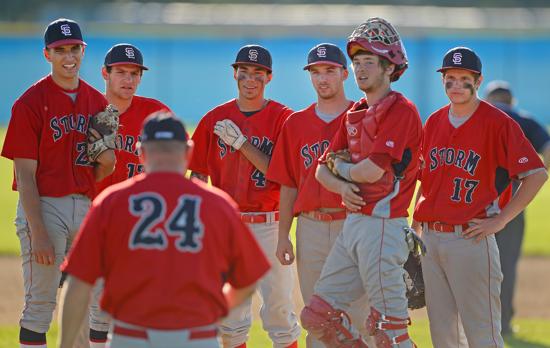 South Elgin head coach, Jim Kating (Back to camera) visits the mound to talk to his players during the fifth inning of Thursday's IHSA 4A Regional semifinal game against Wheaton North. | Brian O'Mahoney/For Sun-Times Media

South Elgin’s Ryan Nutof normally leaves an impression on opponents and pro scouts with his work on the mound.

In Thursday’s Class 4A Hoffman Estates Regional, he initially impressed with his bat by blasting a first-inning, opposite-field solo home run, before firing a one-hitter for five innings as South Elgin hammered Wheaton North by the slaughter rule, 10-0.

“It was kind of an accident,” the left-handed hitting Nutof said of his third home run. “It was an 0-2 pitch. I just tried to fight it off, and it just went out.”

Nutof struck out four, walked three and was never really threatened after the first inning, when Greg Scandora hit a two-out ball into left that was misplayed but was called a triple by Hoffman Estates High’s official tournament scorer.

Nutof then coaxed Greg Sells into grounding to short to end the inning with a 1-0 lead. The Storm offense took it from there with timely hitting to reach Saturday’s 11 a.m. title game against host Hoffman Estates.

“I was pretty much starting ahead on the count, really,” Nutof said. “That’s what helps.

“A lot of good defensive plays out there. I only had a couple strikeouts out there, just a lot of defensive work.”

“His curve ball was really good today,” Storm catcher Nate Brummel said. “He was hitting his spots. He was moving it really well. He had his two-seam going and fooled a couple guys with his changeup.”

The Storm (20-10) drove Hoffman Estates starter Zach Colangelo (4-4) from the mound in the third. South Elgin had scored in the second for a 2-0 lead on Justin Bryski’s RBI double after Dan Asa had a leadoff single.

In the third, Dane Toppel (2-for-4) doubled and Jared Kramer singled him home. Then Antonio Danesi had an RBI single. Reliever Ben Cary threw a wild pitch to score the third South Elgin run. The Storm hit the 10-run mark with a five-run fourth, highlighted by Kyle Hays’ RBI single. Two errors, a bases-loaded walk by Asa and Danesi’s sacrifice fly scored the other runs.

“We put some runs on them early and any time you can put runs up early on any team, and Ryan is throwing the way he did today it gives you a lot of confidence,” Storm coach Jim Kating said. “We took advantage as much as we could today.”

Wheaton North (18-15) had actually been the favorite, with a seventh seed in the sectional to South Elgin’s 10th.

“We hit the ball hard a couple times,” Wheaton North coach Dan Schoessling said. “It was one of those days where we hit the ball right at somebody in those instances when we did.

“But Ryan pretty much controlled the game. Other than a few hiccups there, I think he was in command most of the time.”

South Elgin goes for its third regional title in five years Saturday against 16th-seeded sectional host Hoffman Estates, and it’s conceivable Nutof could pitch an inning or two after close to 70 pitches Thursday.

“I feel like our coaching staff has done a very good job getting the kids prepared for situations,” Kating said. “We’ve got a chance to play for another regional title and we missed out a little in conference — a couple games short — but we have been playing pretty good baseball for the second half of the season.”