Battling through a groin injury suffered in a sectional, North Lawndale's Imani Payton eased into the Class 3A finals in two events with qualifying efforts. He hopes to be at 100 percent Saturday. Meanwhile, Dunbar's Demoria Harris has his sights set on his brother's PR in the 200. 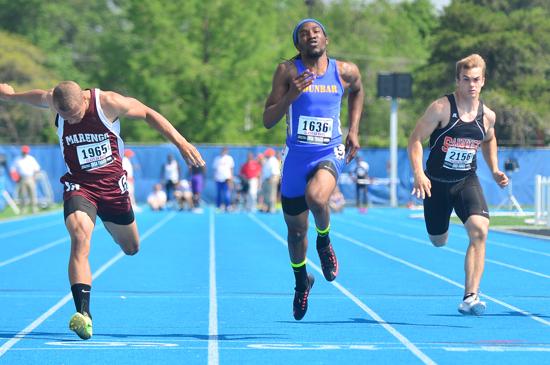 CHARLESTON, Ill. — Imani Payton bought himself another day on Friday, which was all he wanted to do.

“I just wanted to make the finals so I could rest tonight and come back tomorrow full strength,” said Payton, who also helped North Lawndale reach the 400 relay final.

That last race didn’t please him. “That’s when it started hurting, in the 110s,” Payton said. “And I didn’t have enough time to stretch it out. I had to come right back in the 4-by-1. But it is what it is.

Health isn’t an issue for Dunbar’s Demoria Harris, who will be trying to become the second state champ and the fastest 200 runner in his family Saturday.

Demoria went 21.52 in winning his Class 2A heat and then said he’d like to get the class record, which was 21.46 by Centralia’s DeVantre Whitelaw in 2011. But in the next heat, Galesburg’s Josh Eiker ran 21.28, meaning Harris will adjust his goal down to 21.1.

Darvell Harris plans to be at the finals, and the idea of adding another 200 state first to the family trophy case has Demoria motivated.

“It would mean a lot because last year I almost had it,” Harris said. “Cole Henderson beat me and this year I’m going for my brother’s [personal] record [of 21.44].”

Also in pursuit of history are Lake Park’s Antonio Shenault and his teammates, who are going for an unprecedented fifth consecutive state title in 3A.

The Lancers are one of four teams with eight finals qualifiers, joining York, Neuqua Valley and Edwardsville. Also in the trophy hunt: Thornton and Downers Grove North with seven qualifiers each and Minooka and Schaumburg with six apiece.

“It was a little sloppy, but got the job done today,” he said of the hurdles race.

The Lancers have gotten a boost from the return of Marcus Jegede, who qualified first by two feet in the triple jump (48-4.75) and also ran on the 400 relay.

“That’s huge,” Shenault said. “We’ve missed him for just about all of outdoor season. So having him back is going to be a great big deal for us.”

Looking for a trophy in 2A is Kaneland, which qualified 12 individuals and all four relays for the finals.

“Senior year, I’m ready to finish it with a bang,” said Dylan Nauert, who advanced in both hurdles and the 400 and 800 relays. “I graduate Sunday. [Saturday’s] going to be the greatest way to end high school anyone’s ever [thought] of.”