Neuqua Valley would fall tantalizingly close as York ended the four-year reign of Lake Park in Class 3A with 40 points. 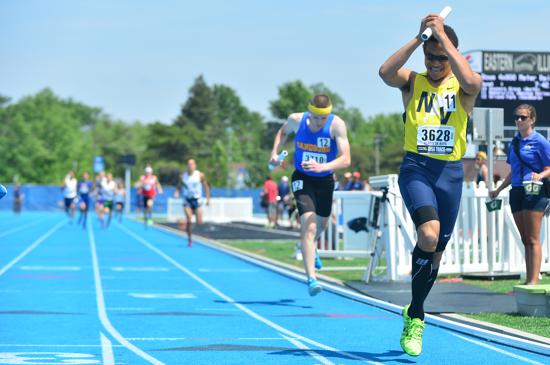 CHARLESTON, Ill. — Ty Moss did everything within his power Saturday to propel Neuqua Valley to the team trophy stand at Eastern Illinois University.

But the Wildcats’ junior sensation and his teammates fell a few points shy.

Moss powered the Wildcats’ 3,200-meter relay to its first boys track and field state championship in four years and was indispensable to the 1,600 quartet with another brilliant anchor leg.

He also came out of nowhere to finish third in the open 800 with his trademark kick.

“We shall see,” Moss said in the aftermath of the 1,600 relay when asked if Neuqua Valley was in trophy contention.

But the Wildcats would fall tantalizingly close as York ended the four-year reign of Lake Park in Class 3A with 40 points.

But the team verdict will never overturn how Moss and teammates Connor Horn, Jeremy Stern and Nick Rafacz collaborated on a school-record time of 7 minutes, 40.21 seconds to win the 3,200.

“After what Connor did (on the first leg), I had to match that if not surpass it,” Stern said.

“I stayed on his shoulder,” Moss said of the final push against Sandburg. “It was down to the wire.”

Adam Peterson was sixth in the pole vault for Neuqua.

Benet’s Stephen Hubona enjoyed a state championship from the other end of the spectrum.

Marks in the field events carry over from the preliminaries, and Hubona had few worrisome moments in making his first state individual state championship for the Redwings’ program a reality.

“I don’t think it has really hit yet,” said Hubona, whose second throw on Friday at 185 feet, 1 inch withstood all Saturday competitors. “(A state title) has been my goal since freshman year. (The winning throw) slipped off my finger perfectly.”

“(Harris) was definitely one I was watching,” Hubona said. “He was always on my radar.”

“I still had a great senior season — conference champions, sectional champion,” Harris said. “Congrats to the two guys who beat me.”

Naperville Central senior Sam Bransby ended his career by duplicating his All-State runs in both 400 disciplines — the open event and the 1,600 relay.

The Nebraska-bound senior held off Moss’ furious charge to give the Redhawks second to East St. Louis in the final event.

Zac Espinsa, who accounted for the final Neuqua Valley individual points with his fourth-place finish in the 400, led off the Wildcats’ third-place relay.