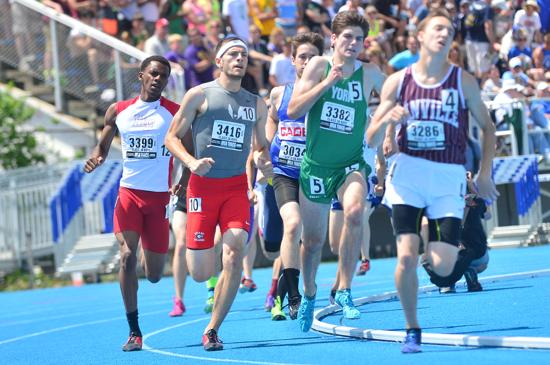 CHARLESTON, Ill.--It was a challenge Matt Anyiwo first tried as a freshman that he described as “crash and burn.’’

Three years later, the Homewood-Flossmoor senior was able to handle the 800-meter run followed after a one-event break by the 400-meter dash.

“The Rock Island Invite was approaching this year and coach asked me if I wanted to do the double,’’ Anyiwo said. “The training they put me through all these years really prepared me for this double.’’

He was seventh in the state 800 last year to Danville’s Johnny Leverenz, who won again this season (1:52.00). Two runners who finished ahead of Anyiwo in 2013 were behind him in this year’s 800 final.

Anyiwo was fourth halfway through Saturday’s race before he made his move toward the lead.

“It was definitely a tough race,’’ he said. “I waited too long to move on Leverenz. He got to open up that gap, but I’m satisfied with it. I lost to a really accomplished runner.’’

Led by senior Tifonte Hunt, Thornton came within four points of a team trophy. The Wildcats totaled 32 points while Edwardsville and Lake Park tied for second with 36.

Hunt was close to winning a state championship, finishing second in the 110 hurdles (14.17) to Lake Park’s Antonio Shenault (14.14), who was third last season.

“I hit the last hurdle. I almost tripped up,’’ Hunt said. “I had to pick myself back up at the end.’’

Thornton also got a runner-up finish from its 800 relay (1:26.26) of Taveres Hale, Demitrius Mitchell, Hunt and Jauan Wesley.

The 400 relay of Martise Craig, Hunt, Mitchell and Wesley finished third (41.62). The Wildcats had the best sectional time, but ran without Cavion Clanton in the final after he suffered a pulled hamstring in prelims.

“We had big intentions coming in here, but I think we did all right,’’ Hunt said. “There was some real good competition.’’

Sandburg nearly claimed a state title in the 3,200 relay as the foursome of Chris Torpy, Matt Hetzler, Sean Torpy and Denis O’Callaghan placed a close second (7:40.77) to Neuqua Valley (7:40.21).

“We had a fantastic race,’’ Hetzler said. “Everyone ran their part.’’

“We ran our fastest time of the season. It was a good way to end the season,’’ O’Callaghan said.

Providence junior Andy Jatis claimed third in the pole vault (14-9) and teammate Mike Monroe was 13th in the high jump (6-4).