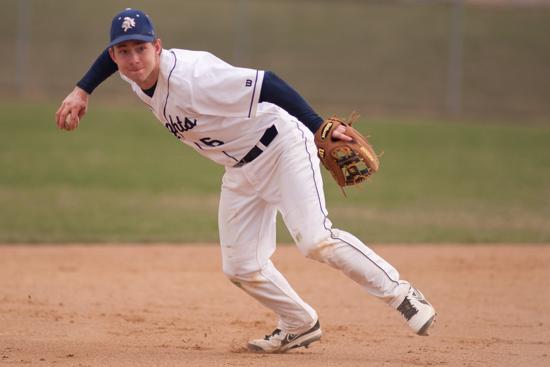 Two area athletes recently concluded impressive careers for the Carleton College baseball team in Northfield, Minnesota. Jeff Dsida, a New Trier alumnus, and David Stillerman, an Evanston graduate, led the Knights to a 22-14 record, including a 12-5 mark at home and a 12-8 record in the Minnesota Intercollegiate Athletic Conference. Both players were also named to the D3baseball.com All-Region team.

Dsida, a senior catcher, started 31 games and played in 32. He finished the season with a .415 batting average, a team-leading .489 on-base percentage and a .661 slugging percentage. He finished 3-for-4 in stolen base attempts, knocked in 17 runs and scored 32. He also led the team in triples with seven.

Stillerman, a senior infielder, hit .370 with a .437 on-base percentage and a .533 slugging percentage. He started each of the 34 games in which he played. He finished with 24 RBI and a team-high 47 runs scored. Stillerman also was a second-team selection to the Capital One Academic All-America Division III Baseball team. The Academic All-America Baseball Teams are voted on by the College Sports Information Directors of America.

Mundelein alumna Megan Geldernick, a redshirt sophomore for the Wisconsin-Oshkosh women’s track and field team, took third place in the 100-meter hurdles at the Wisconsin Intercollegiate Athletic Conference Outdoor Championships May 2–3 at the Oshkosh Sports Complex in Oshkosh, Wisconsin. Geldernick finished with a time of 14.58 seconds. With her help, UW-Oshkosh finished second as a team in at the event.

Hinsdale Central alumna Adabelle Ekechukwu, a senior on the Harvard track and field team, posted a new personal best in the hammer throw with a mark of 62.5 meters, taking third place at the Eastern College Athletic Conference and Intercollegiate Association of Amateur Athletes of America Championships May 16–18 in Princeton, New Jersey. Her mark is the second-best in Harvard history.

Deerfield alumnus Igor Liokumovich, a junior thrower, is also on the team. He took seventh place in shot put at the Ivy League Heptagonal Championships May 11 in New Haven, Connecticut, with a throw of 17.2 meters.

Carolina Carmichael, a Lake Forest alumna and sophomore on the Memphis women’s track and field team, earned the gold medal in the pole vault with a height of 4.08 meters at the 2014 American Athletic Conference Outdoor Track and Field Championship. The mark was a new AAC record.