East Aurora's Tim Young was named Outstanding Wrestler of the two-day FILA tournament in Akron, Ohio after posting six wins at 85 kilograms (187.25 pounds), capped by a tech fall win May 24 in the title match. 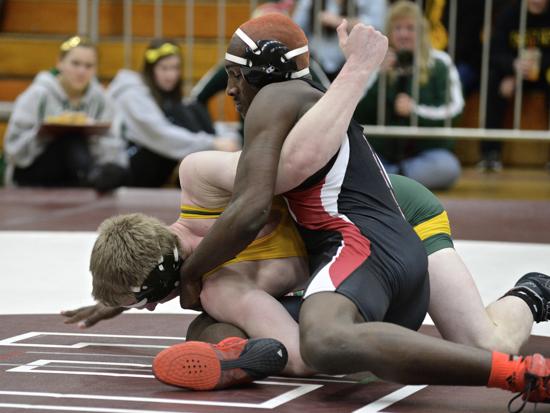 It’s not as though East Aurora wrestler Tim Young was unknown.
The junior finished one round shy of reaching all-America status in Greco-Roman wrestling at last year’s FILA Cadet Nationals tournament, and he went 21-6 at 170 pounds during Illinois’ rugged high school wrestling season.

But this year’s FILA tournament in Akron, Ohio, put Young on the national radar in a big way.

Young was named Outstanding Wrestler of the two-day tournament after posting six wins at 85 kilograms (187.25 pounds), capped by a tech fall win May 24 in the title match over Samuel Colbray.

“At every tournament this year I placed second and the guy I lost to won the outstanding wrestler award,” Young said. “I didn’t go into this tournament expecting to win but once I got into the finals I started to believe that I could do this.

“To finally get a title, at a national tournament, I was really excited. The first people I called were my dad and my mom and my dad was like ‘you really won it?’ They were really excited.”

Before the title match, Colbray’s pedigree wasn’t something Young was overly concerned with.

“I didn’t really know who he was before that match,” Young said. “My dad always tells me to just take God with me on the mat, and I always pray before my matches.”

Young will turn 17 in June and his FILA title earned him a trip to Snina, Slovakia, in July, where he’ll compete in the FILA Cadets World Championships. He’ll also compete in Nanjing, China, in August.

“I know (Slovakia) is in Europe but I’m not exactly sure where it’s at,” Young said. “I’ve been to a couple different states for wrestling but I’ve never been out of the country.”

Young finished one win away from Class 3A sectional advancement at 170 pounds in Illinois this year. East Aurora coach Frank Davison expects Young to move up to 182 for his senior season.

“I was surprised and happy to hear that he won it,” Davison said of Young’s national title. “Tim has very good technique, he was a frosh-soph state champ and just missed qualifying downstate as a sophomore. Most importantly, he’s just a great kid.”

The leg attacks in folkstyle are not allowed in Greco-Roman wrestling. Young shines in wrestling Greco-style but has high goals for Illinois’ folkstyle season in his senior year.

“I know I needed to be more aggressive last year during the high school season and I’ve gotten much better about that,” Young said. “It can also be hard to switch over from Greco to folkstyle but I’ll be ready.”