Pat Disabato breaks down area baseball, including a Providence team that is now benefiting in the playoffs after completing a brutal regular season schedule. 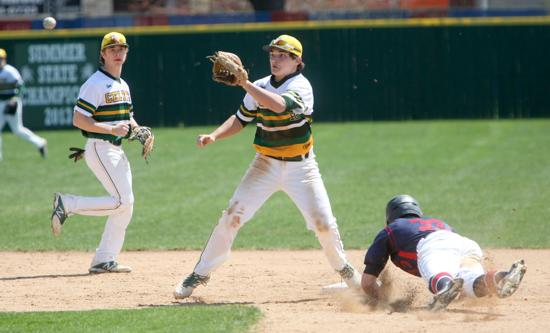 It's debatable whether anyone played a tougher regular season schedule than Providence.

Beyond competing in the Catholic League Blue, the Celtics tangled twice with SouthWest Suburban Blue champion Lockport and once each against defending Class 3A state champion Joliet Catholic and New Trier.

It resulted in 14 losses and a three-game losing streak entering the Class 4A playoffs.

However, playing elite competition appears to have its benefits. The Celtics captured the Lockport Regional, knocking off the host Porters and Brother Rice.

"I told the kids before the playoffs that our record isn't pretty," Celtic coach Mark Smith said. "But I don't care about the losses during the regular season. It's all about the postseason."

It's also been about the Celtics improved play defensively. Providence suffered some growing pains with four sophomores starting in the infield.

"We've had our struggles, but it was when we didn't make the routine plays," Smith said. "When we make those plays, we can be successful."

It's also helped that senior Dylan Rosa has shined in clutch spots. The senior infielder/pitcher stroked a go-ahead two-run double Wednesday during a 4-2 win over Lockport, then matched the feat

Saturday against Brother Rice before adding a game-winning solo homer during a 5-4 win.

Senior pitcher Jake Godfrey, who struggled early in the season, performed like an ace against Lockport and came on in relief against Rice to slam the door.

"Jake has always been a competitive kid," Smith said. "I think he tried to do too much at times, which is a recipe for disaster."

The Celtics take on Sandburg Thursday in the Andrew Sectional semifinals. Smith hopes his team can continue its sterling play.

"Those are going to be the keys," Smith said. "I'm just going to let the kids go out and play, have  some fun and try to stay out of the way."

Seniors Rylan Bannon, Aaron Markley, Danny Weis and John Kalisik all have played their final game for the perennial powerhouse. However, there's plenty of top tier talent left in the cupboard, starting with the top two pitchers in the rotation, Nick Dalesandro and Drake Fellows. That duo combined to go 13-2 on the season.

Max Strus, of Stagg, is this week's SouthtownStar Baseball Player of the Week. The 6-foot-6 senior picked up two playoff wins on the mound and belted a two-run homer to lead the Chargers to a 3-2 win over Lincoln-Way East in the Class 4A Homewood-Flossmoor Regional championship.