Naperville Central's Sam Bransby duplicated his All-State campaign from his junior year with a state seventh-place result in the 400. 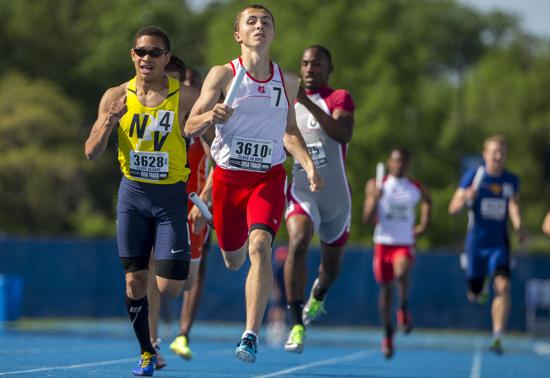 The week before, at the Class 3A Joliet West Sectional, Espinosa finished three one-hundredths faster than Bransby for the two top positions of the 1,600 relay.

But Espinosa finally got the best of Bransby in the Saturday finals of the 400: the junior finished fourth in the event in 48.18 seconds.

Bransby duplicated his All-State campaign from his junior year with a seventh-place result in 48.40.

“Bransby and I are friends,” Espinosa said. “I learned a lot from watching Bransby earlier [this season]. Bransby was always that guy I looked at and said, ‘I want to be him.’”

But Naperville Central and Bransby would still be heard from in the final race of the season at Eastern Illinois University.

As the final team results demonstrated, Neuqua Valley needed to win the event to finish third. The team changed its strategy, shifting Espinosa from the anchor to the lead leg.

“Espinosa led off because he had the most racing experience in the open four,” said Ty Moss, who anchored the Wildcats’ state championship 3,200 relay before placing third in the open 800. “We thought to be in the mix (Espinosa) should be leading it off.”

But the Naperville Central quartet, with Daniel Spaccapaniccia handing to Matthew Meier, had two seasoned veterans in Michael Jopes and Bransby.

The latter two were All-State contributors to the Redhawks’ third-place unit from last year.

East St. Louis had the best preliminary time, and the results did not differ from Friday in the championship run.The Flyers broke 3:17 to win the event.

But Bransby had a final moment of high school glory, holding off Moss to secure runner-up status for the Redhawks in 3:17.21.

Moss was .13 seconds slower, and the Wildcats had to settle for fourth place overall with 34 points.

“I couldn’t have asked for a better way to end my high school career,” Bransby said.

All by himself
State champion Stephen Hubona, who captured the discus by more than 10 feet with his 185 foot, 1 inch throw in the Friday preliminaries, was the lone representative for Benet.

“I have the coaches to keep me company,” Hubona joked after taking a near-15 foot lead in the event on Friday.

The same injury scuttled Tony Durns’ chances of a finals berth in the 100 dash Friday.

He was barely able to conclude his preliminary heat after the injury resurfaced in the opening meters of the race.