Burlington Central, behind Ege and fellow All-Stater Matt O’Connor, finished behind only Cahokia and Kaneland in the 1,600 relay to score the last of their 38 points. 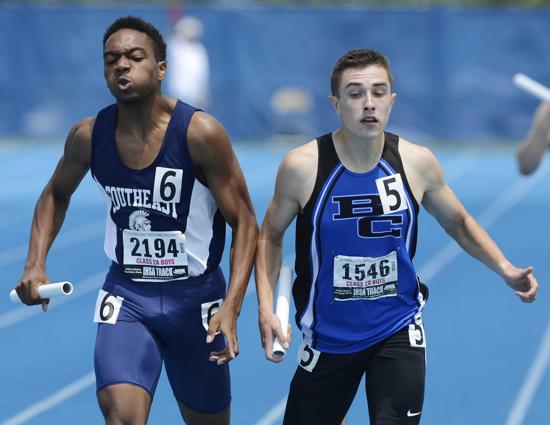 CHARLESTON, Ill. — The IHSA has a no-exception prohibition against coaches interacting with their athletes on the track during the state meet.

The coaches, therefore, are forced to operate from behind the scenes.

As the Class 2A boys state meet reached its denouement Saturday afternoon, three-time defending champion Cahokia and Kaneland had essentially lapped the field for the top two spots.

But the third-place trophy was up for grabs.

“We’re going to have to keep an eye on him,” Schmidt told his assistant coaches of Carbondale 200 finalist Tayvonne Landry.

But Burlington Central, behind Ege and fellow All-Stater Matt O’Connor, finished behind only Cahokia and Kaneland in the 1,600 relay to score the last of their 38 points.

The Rockets moved past Carbondale (34) and Dunbar (33) to earn their first state trophy in 13 years.

Casey Matthews ran a leg on both sprint relays (400, 1,600) in the finals for Burlington Central.

“(The coaches) didn’t tell us anything about the points (for the team standings prior to the race),” Matthews said. “I knew I had to stay up with the Cahokia kid. We had to get as many points as we could to pull ahead of two teams (Carbondale, Dunbar) with us.”

No prelim, no problem

The 3,200 run has the distinction of being the only event without a preliminary at the state finals.

St. Charles North was the only local 3A school with any athletes who qualified for the second day of competition.

But Bartlett senior Dan Cotton concluded his career with one final performance in the longest open race.

“I was going to hang with front pack,” Cotton said of his race strategy. “I had a great time, a great senior year.”

Dundee-Crown's Austin White made the most of his maiden voyage at the state finals, despite failing to qualify in the 200.

“It was an amazing experience,” White said after his Friday preliminary of 22.42, fifth in his heat. “I could have done better but had a nice year.”

“I’m looking at the 2016 season,” Williams said of his long-term goals. “I see the New Trier seniors here. I was their middle school coach. (The 2016 season) will be the first time I’ve had them all four years.”