Second-seeded Glenbard West finished with 17 blocks, 12 of which went for points Tuesday in a 25-15, 25-16 defeat of top-seeded Naperville Central. 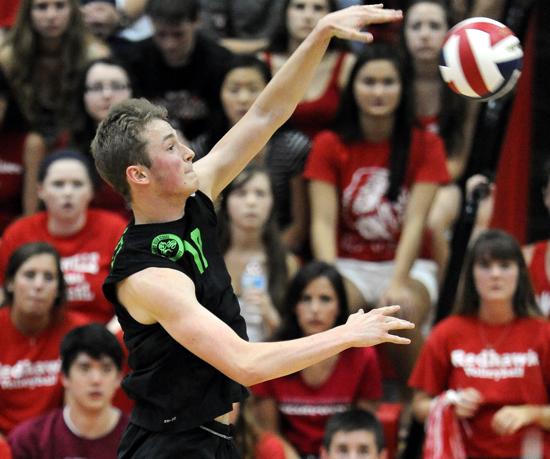 The hands said it all.

Glenbard West senior Peter Scruggs had redness and some soreness in his taped-up hands Tuesday night and it wasn’t hard to figure out where it came from.

The 6-4 middle blocker and his teammates spent most of the Hinsdale Central Sectional championship game emphatically rejecting Naperville Central attacks. The second-seeded Hilltoppers finished with 17 blocks, 12 of which went for points, in a stunningly easy 25-15, 25-16 demolition of top-seeded Naperville Central.

Glenbard West (33-6), which tied the school record for wins, will play Morton at 6 p.m. Friday at the state quarterfinals at Hoffman Estates.

“Our block was spot on,” Scruggs said. “We did a lot of scouting before the game and it was incredible that we could actually take what we did scouting and put it on the court. Our coaches did not hold back when it came to preparing for this game and we have everything to thank because of them.”

Jackson Nagle and Scruggs scored the first two points of the game on blocks and the Hilltoppers never trailed.

Naperville Central (34-5) pulled within 15-13 in the opening set on a block by Tanner Beck, but junior Parker Swartz recorded three of his five blocks during a 10-2 run for Glenbard West, which fittingly clinched the game on a block by Paulie Bischoff.

“Our blocking plan was we went over their rotations and figured out where their players where,” Scruggs said. “We had to make sure we watched their setter.

“Their setter [Dan Trembacki] was key and they had some really powerful hitters. We just had to make sure we keyed up on the important players and stayed together as a unit.”

The Hilltoppers did so and the Redhawks, who scored consecutive points just four times during the match, had no answer.

Naperville Central star Jack Burton led all players with six kills, but four came in the second set with the game out of reach. The Redhawks were held to 15 kills and just four blocks.

“We just couldn’t hit anything past or around the block,” Naperville Central coach Roger Strausberger said. “I don’t know if our hitters just weren’t seeing the block. It seemed like every ball that we were hitting we were just hitting right into the middle of their block and they were putting the ball down.”

Scruggs, who had four blocks and two kills, had a block during a 5-1 run to open the second set, which was almost a carbon copy of the first game.

The Redhawks closed within 10-8 on a Burton kill only to see the Hilltoppers answer with a 13-4 run that featured five more blocks.

“We really focused on [blocking] and it turned out great for us,” Swartz said. “It just gave us a ton of energy at the start of the game. That just carried us throughout the game.

“We were feeling the excitement and we’re ready to go Downstate and win us a championship.”

This will be the second trip to state for the Hilltoppers. They were fourth in 2011.

“Getting out of the sectional is an accomplishment in itself but going down to state is even more than I could have dreamed of,” Scruggs said. “When I came into West as a freshman, their varsity team went down to state. All I’ve ever wanted is to mirror what they did.”

Bischoff had 13 assists for the Hilltoppers, who also received five kills from Kyle Blane and four from Nagle.