Patrick McGavin breaks down the Class 3A and 2A state semifinal games on Friday at North Central College, including a rematch between No. 1 Waubonsie Valley and No. 2 New Trier. 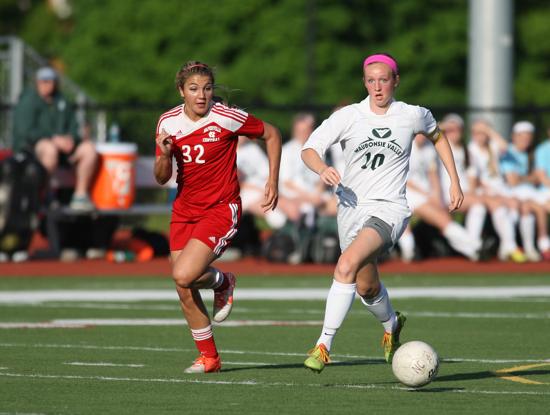 Mackenzie Fuller (20) scored both goals in Waubonsie Valley's 2-1 victory over over New Trier in the Naperville Invitational earlier this season. | Mike Mantucca / For Sun-Times Media

On the first Saturday in May at Naperville Central, Waubonsie Valley midfielder Mackenzie Fuller scored two goals minutes apart in the second half as the Warriors knocked out New Trier 2-1 to win the Naperville Invitational.

A month later the two teams are poised to meet again as No. 1 Waubonsie Valley collides with No. 2 New Trier in the marquee game of the Class 3A state semifinals Friday at 7 p.m.

The first semifinal is a mystery as two teams stunned the field to qualify for state semifinal play. Under the radar Lincoln-Way North shocked Lyons 2-1 on penalty kicks to advance to its first state appearance ever. The Phoenix confront St. Charles East, a team hot at the right time.

Here is a closer look at the four semifinals: