In Wednesday’s 4-1 Class 4A Schaumburg Sectional semifinal win over West Chicago, Batavia's Jacob Piechota wanted to take care of the Wildcats. He did just that, tossing a complete game and getting out of a bases-loaded jam in the top of the seventh. 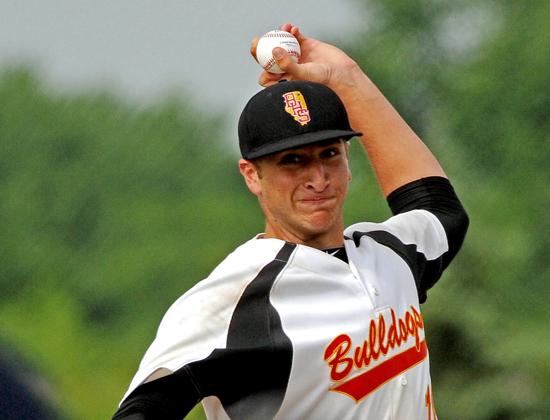 With the wealth of bullpen options Batavia has at its disposal, it isn’t a requirement that senior pitcher Jacob Piechota finish games himself.

But in Wednesday’s 4-1 Class 4A Schaumburg Sectional semifinal win over West Chicago, Piechota wanted to take care of the Wildcats.

He did just that, tossing a complete game and getting out of a bases-loaded jam in the top of the seventh. He struck out six, walked none and allowed a run on five hits to improve to 7-1.

“I haven’t gone that deep in games because we have a great bullpen and I know they can come in and finish them off,” Piechota said. “I had some extra adrenaline. I really wanted this game.”

Senior Laren Eustace jumped on the first pitch from West Chicago junior pitcher Fred Gosbeth (3-3) in the first and crushed it to right field to open a quick 1-0 lead.

“Most of the time they’re trying to get ahead, so they’ll just throw you a fastball down the middle,” said Eustace, who had five home runs this season, four of which led off games. “It felt really good. A lot of times you know when it’s going to go out, and that was one of them.”

Jeremy Schoessling then walked and scored on a Micah Coffey single to make it 2-0.

West Chicago (18-18) got on the board in the third as Grant Hosticka singled and scored on a Connor Dall groundout. It was one of the few times the Wildcats threatened in the game. They had a runner on third and one out in the top of the first but came up empty.

“We got behind against a team like Batavia, you can’t do that,” West Chicago coach Dan McCarthy said. “They’re just so solid. They don’t make mistakes. They deserved to win. They just don’t beat themselves. You have to beat them. We had a couple opportunities.”

West Chicago threatened in the seventh. With a runner on first and two outs, Piechota induced a groundball, but an error kept the inning alive. Dorian Martinez followed with a single, but he struck out leadoff man Austin Kordik to end the threat.

“I think he got stronger,” Batavia coach Matt Holm said. “He threw a lot of breaking balls early. Evidently he was saving his fastball. He really dotted it there at the end. He definitely wanted it.”

Next up for Batavia will be another Upstate Eight Conference foe in Saturday’s sectional title game. St. Charles North and South Elgin face off Thursday. Colby Green, Saturday’s likely starter, threw a no-hitter against South Elgin, who did not start star pitcher Ryan Nutof. The Bulldogs went 3-0 against North.