Lincoln-Way North edged Stagg 1-0 Wednesday in a Class 4A Andrew Sectional semifinal behind a two-hit complete-game performance from David Calderon. 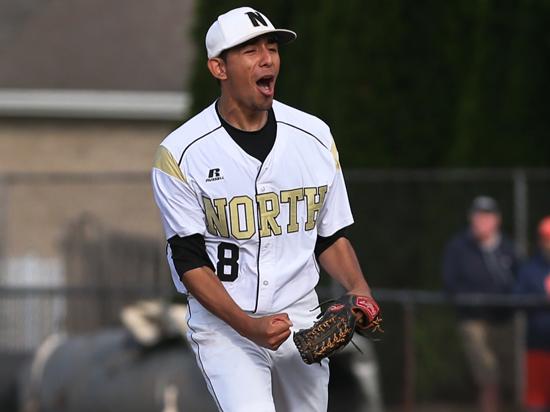 Lincoln-Way North's David Calderon reacts to the final out after pitching a complete game shut out against Stagg. | Allen Cunningham/For Sun-Times Media

Lincoln-Way North's offense has looked anything but intimidating during the postseason, scoring eight runs in three games.

Style points, however, are secondary to what's most important: winning.

Behind a dominant performance by right-hander David Calderon, the Phoenix lives to play another game, edging Stagg 1-0 Wednesday in a Class 4A Andrew Sectional semifinal.

North (28-2) advances to play the winner of Thursday's semifinal between Sandburg and Providence on Saturday at Andrew. The Chargers finish 17-19.

"We haven't been scoring a lot of runs, but this team is full of fight," North coach Mitch Nowicki said. "We were able to put some things together and score the one run."

Stagg pitcher Max Strus was attempting to win his third game in eight days, having defeated Richards on May 28 and then picking up a 'W' in relief Saturday against Lincoln-Way East.

On most days, Strus' complete-game, four-hit effort would have been good enough to record the victory.

However, Calderon (7-0) was even better, limiting the Chargers to two hits and striking out five in a complete-game effort of his own.

"My offspeed pitches were working a lot and I was able to get a lot of ground balls," Calderon said. "With the way the wind was blowing in, I thought I could get away with the high pitch today."

What Stagg couldn't get away with was committing two errors in the fifth inning that allowed the Phoenix to score the game's lone run.

Austin Konagel singled with one out and eventually came around to score on a pair of infield errors.

"We needed runners on base," Konagel said. "I was just trying to put the ball in play. A line drive to left did it."

The miscues were uncharacteristic of how Stagg has performed recently, according to coach Matt O'Neill.

"We've been so good defensively the past three weeks," O'Neill said. "We don't hit consistently enough. We know we've got to be pretty much flawless defensively."

Still, Stagg had a chance to tie the game when Ethan Glaza led off the seventh with a double. While the situation — down a run, less than two outs, runner on second — suggested O'Neill call for a sacrifice bunt, he chose to let the next hitter, Drew Bolero, swing away. Bolero, the No. 6 hitter in the line-up, struck out and the next two hitters grounded out to end the game.

"I know what everyone is going to say, but I was playing for two (runs)," O'Neill said. "I thought we needed two runs to win that game. I thought that was the right way to play it, but I'm sure I'll regret it later."

Besides Konagel, Conor Grove, Nick Garcia and Zach Hoekstra had hits for North. Peter Angelos registered the Chargers other hit on the day.