Conant stayed patient at the plate throughout its 13-0 win over St. Charles East, recording 12 hits in a Class 4A Bartlett Sectional semifinal. 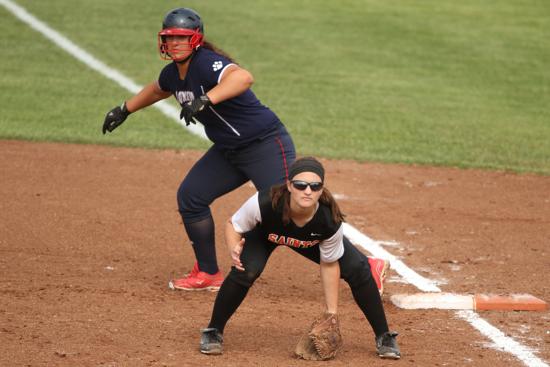 Conant softball coach Cathy Ann Smith had the perfect way to describe the way her girls can hit.

“We’re eagerly disciplined,” Smith said. “We always want the best pitches we can get, and then we want to do something with them.”

What the Cougars did with those pitches Wednesday was impressive. Conant stayed patient at the plate throughout its 13-0 win over St. Charles East, slashing out 12 hits in a Class 4A Bartlett Sectional semifinal.

The mercy rule isn’t applied as often come sectional time but the Cougars ended the Saints’ season in five innings.

“We haven’t done that since the beginning of the year,” Conant first baseman Hailey Rothstein said. “Everyone was together, the momentum was ridiculous, and our dugout was inspirational.”

The third and fourth innings spelled doom for St. Charles East (30-7). Conant (26-5) followed a five-run third with a seven-run fourth, featuring a two-out RBI single from Rothstein that put the game in mercy rule territory at 10-0.
That left a Saints offense that had only mustered two hits off of Conant pitcher Sara Neuman in a tough place.

“We didn’t go out there with our attack like we normally do,” East senior Tess Hupe said. “We didn’t swing at our pitches, we didn’t get hits, and we didn’t move anyone around. You can’t score runs that way. We didn’t show up and they did. Hats off to them."

Neuman (11-2) had a pair of RBI singles to help her cause and Alissa Wachal had a pair of two-RBI doubles in the game. But it was Rothstein’s bat that shined brightest.

The left-handed junior hit a three-run homer in the third inning into the wind that cleared the right field fence with room to spare.

“It was low and outside and that’s my favorite pitch,” Rothstein said. “I’ve been working on that pitch in the garage with my dad.”

Wednesday’s win sent second-seeded Conant to a sectional title game against top-seeded Glenbard North on Saturday, while third-seeded St. Charles East was left to ponder what might have been.

“It was a bad day to have a bad day,” Saints coach Kelly Horan said. “You have to give them credit. It’s not just luck that got them 13 runs but you have to come to play every single day and today we didn’t. When you do that against a good team, they can make you look really bad.”