After finishing third behind St. Charles North and Geneva in the River division of the Upstate Eight, St. Charles East has found its way to the Class 3A state semifinal with a matchup against Lincoln-Way North on Friday at North Central College. 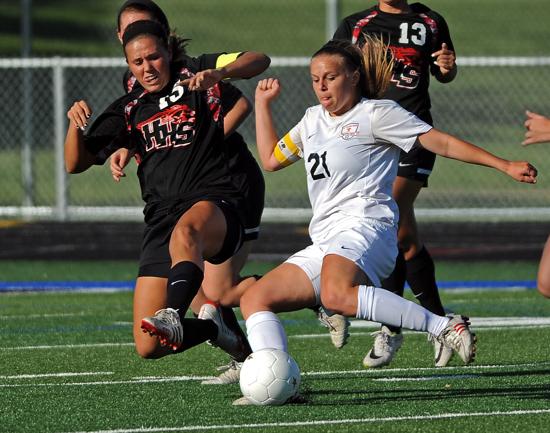 As a general rule, coaches like preparation, knowledge and history. Paul Jennison is a bit unorthodox in relishing the art of the unknown.

Moments after St. Charles East ousted Huntley 2-0 in a Class 3A Supersectional at Lake Park on Tuesday night, the coach offered his original take on the Saints’ state semifinal opponent on Friday at North Central College in Naperville at 5 p.m.

South suburban power Lincoln-Way North (22-3-1) is a mystery to Jennison and most soccer observers. Few people expected the Phoenix had much of a chance against Lyons. The Phoenix avenged a regular-season loss and shocked the Lions on penalty kicks.

It makes for a very intriguing first semifinal.

“To be honest with you, we don’t really know much about them, but anybody in the final four is quality,” Jennison said. “I’m sure they don’t know much about us either, so I think it’s going to be a free game, and both sides going against each other.”

St. Charles East (18-4-5) qualified for its first state appearance since the powerhouse programs of Joe Moreau won the last of their five consecutive state titles in 2000. The rise of St. Charles North adversely affected the Saints’ depth and quality of play.

“It’s absolutely unreal, what we’ve done this year,” said standout senior keeper Kendra Sheehan. “Especially beating North. We just play our game. We don’t worry about opponents or what they do.”

If anything, the players say, the team found its stride when it deliberately forsook its storied past and found its own identity.

“We’re not putting so much pressure on ourselves, and we’re just playing our own game,” junior forward Darcy Cunningham said. She scored her 15th goal of the year on a header in the 67th minute to complete the 2-0 victory over Huntley.

Jennison made changes to the middle of the Saints’ formation after the team struggled at finishing its scoring at the beginning of the year.

“We had some problems early in the season, but that’s behind us,” Jennison said. “Since we made the changes, things have been clicking. The chemistry is great, and these girls are working harder than any group I’ve ever had.

“They’re self-motivated and they want to do well.”

Jennison also made crucial changes in the backline. Sophomore Sonia Ost is the team’s stopper and senior Shannon Rasmussen shifted from forward and has made a difference, Jennison said. “Nobody thought we had a chance to do anything in this postseason,” Jennison said.

“We’re going down there to have fun and enjoy it. If we’re down there, we’re going to try and win it.”