Sophomore Cortlyn Kelly needed time to settle in after she took over as Trinity’s top pitcher this season. 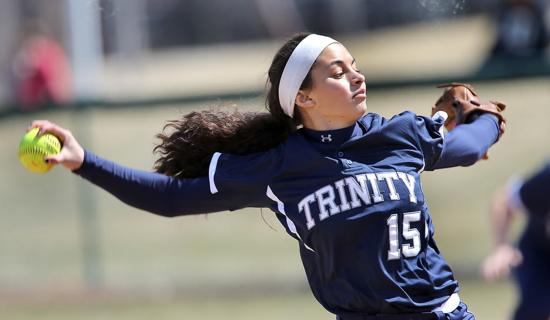 SKOKIE — After enjoying success as a backup to Chase Machain last season, current Trinity sophomore Cortlyn Kelly was ready to be the Blazers’ top pitcher this season.

The 2014 campaign couldn’t have started any better for the Oak Park resident, who won her first two outings as the team’s ace pitcher. But a sophomore slump was lurking right around the corner.

“I had a game where I gave up a walk in a key situation and I just couldn’t get back to myself,” Kelly said. “I really struggled. I was in a pitching slump and I had to overcome it.”

At the end of April, the Blazers took a trip to Metamora to compete in a tournament. Trinity went 3-1 but Kelly pitched just two innings, both in relief.

“I felt really disappointed in myself,” Kelly said. “At that point I wondered if [Coach Bob Osborne] didn’t believe in me anymore.”

Kelly met with Osborne after a practice and he assured her that wasn’t the case. She got two starts over the next week and won both and, just like that, she was back in the groove.

“I think the pressure of being the No. 1 pitcher got to her a little bit,” Osborne said. “She had to take over for Chase, who was one of the better pitchers in the state.

“The last 10 games she’s becoming the pitcher she wanted to be. The big thing for her is perseverance. You go through a rough patch and you doubt yourself, you wonder if you’re good enough to play at this level. We always talk about taking advantage of opportunities and she got another opportunity and took it.”

It’s all about the three C’s for Kelly.

“I need to stay calm and confident and keep my composure,” Kelly said. “I know when I was younger I would drop my shoulders and look down. It’s really about me staying calm and keeping my composure. It’s always something I need to work on.”

Kelly was lights’ out for the Blazers (22-12-1) during their run to the Niles West Regional championship last week. She tossed three scoreless innings in a 10-0 five-inning win over Maine East on May 28 and then went the five-inning distance in an 11-1 win over Payton in the title game on Saturday.

Trinity advanced to it sectional semifinal against York scheduled for Tuesday. The winner will take on either OPRF or Fenwick at 11 a.m. Saturday at Concordia.

In the process, she lowered her ERA to 2.94 and lifted her record to 11-4. She’s struck out 69 batters while surrendering just 24 walks.

“We play on the same travel team [Downers Grove Rebels Elite] so I got to see her pitch in the fall,” said fellow sophomore Anyssa Iliopoulos. “She did really well keeping batters off-balance so I was really confident with her coming into the high school season.”

And with such a young team, the future looks bright for Kelly and the Blazers.

“We have nine sophomores on our team and that’s half our team,” Kelly said. “We all love each other so much and have no issues with each other. We just need to keep working together, skill-wise, and I think we’ll be OK.”