Oak Park-River Forest duo became a doubles team this season and went 5-2 at the state meet. 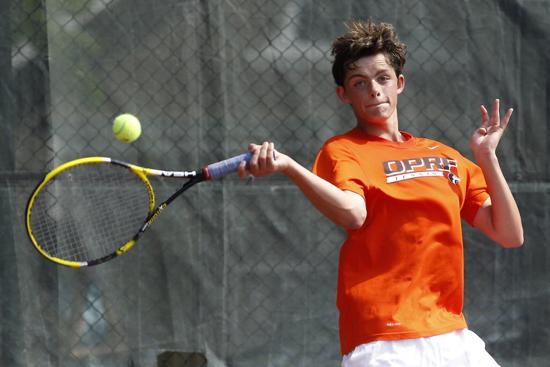 Jonah Philion and Miles Blim may not have had much in common individually, but on the tennis court the Oak Park-River Forest tennis players discovered ways to win together.

Philion and Blim won their first three matches and finished 5-2 at the state boys tennis meet last weekend to reach the consolation quarterfinals before losing to downstate Morton’s Grant and Trent Reiman, 3-6, 6-4, 6-1.

One passion Philion and Blim do share is their love of reading.

Philion, a senior, mainly reads non-fiction, while Blim, a junior, loves fiction. Blim carried a copy of the 1996 novel “Infinite Jest” by David Foster Wallace during the state meet. The 1,079-page book is set in the future, partially at a junior tennis academy.

Between games and sets, Blim read passages to Philion on the sideline.

“We talked a lot about books we would read in addition to tennis,” Philion, who is headed to Harvard, said. “On those long bus rides, we always liked to read books.”

“During our final match, we would read a random page from the book. It helped us calm down,” Blim said. “We used [the book] as motivation. We did not take our playing too serious.”

Following the state meet, Blim gave Philion his own edition of the book with a personal inscription as a graduation gift.

“I wrote about how we became good friends and how we ended the season well,” Blim said. “We played at a higher level than our seed suggested. We played even better.”

The two were not close before the season, but bonded over tennis and literature.

“I think we have complimentary skills,” Blim said. “I’m a server-forehand player; he’s a net player. He’s different. He’s more of a doubles player than I am. I have a singles view.”

A year ago, Philion and Blim had different experiences at the state meet. Blim went 1-2 in the singles bracket, while Philion finished 0-2 at doubles with graduate D.J. Arends. Blim was inexperienced as a doubles player, but picked up strategic techniques from Philion.

“Knowing the geometry of the court is huge in doubles,” Blim said.