When Payton and Warren meet in Friday's state quarterfinals, one team will emerge with its first semifinal appearance. Phil Brozynski breaks down all four quarterfinal matches here. 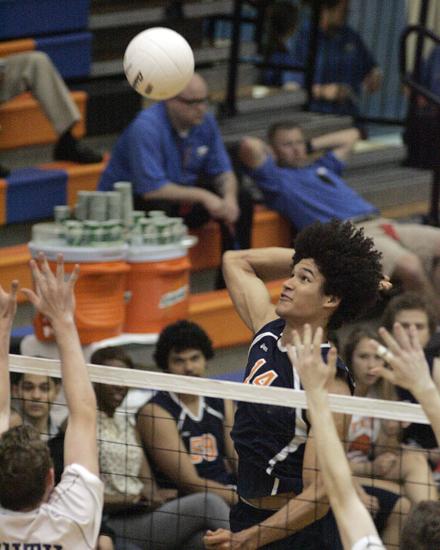 Earl Schultz, a three-time Sun-Times All-Area selection, had more than 300 kills, 50 aces and 35 blocks during the regular season for Payton.

Friday, someone will make history.

The annual IHSA boys volleyball state tournament gets underway Thursday at Hoffman Estates when New Trier and Lake Park meet in the first quarterfinal at 1 p.m. Waiting in the wings will be Payton and Warren, who square off at 5 p.m.

Payton is powered by 6-4 senior Earl Schultz, a three-time Sun-Times All-Area selection who had more than 300 kills, 50 aces and 35 blocks during the regular season. Schultz gets help from 6-1 outside Alex Brown, 5-11 setter Lincoln Wang and 6-4 sophomore rightside Max Donovan.

“I think we just need to play the kind of volleyball we know how to play,” Schultz said. “The last two times down there we played tentative, we played scared. If we leave it all on the floor, I think that would put us in the best situation to win.”

“This group of young men has worked so hard for this moment,” Warren coach Yun Chen said. “They set one goal for themselves at our very first practice. We have been waiting for this opportunity all season long, and we are ready to seize the moment.”

Here’s a look at the other three quarterfinal matches:
New Trier (32-7) vs. Lake Park (32-6), 1 p.m.
These teams met in the semifinals of the Tiger Classic earlier this season with the Trevians prevailing 25-17, 22-25, 25-22. Both teams feature outstanding setters — 6-3 junior Dante Chakravorti for New Trier and 6-2 Quin Krisik for Lake Park — and plenty of weapons across the net.

“We have to do our thing,” said Lake Park coach Tim Murphy, who led the Lancers to the quarterfinals in 2012. “If we play how we can play, I like our chances. If we don’t play well, anything can happen against any team.”

“We are playing at a very high level right now and this is the most focused and determined team that I have coached,” coach Kris Fiore said. “Our kids are very excited to finally get a chance to play at Hoffman Estates.”

Morton (22-9) vs, Glenbard West (33-6), 6 p.m.
The Hilltoppers are looking to improve on their fourth-place finish in 2011. They field one of the youngest teams in the tournament led by sophomore setter Paulie Bischoff, sophomore outside hitter Kyle Kotsakis, junior middle Parker Swartz and junior opposite Jackson Nagle.

Morton is returning to the quarterfinals for the first time since 2010, and is another team looking for its first win at Hoffman Estates. The Mustangs aren’t big – 6-1 Alex Olivares towers over his teammates – but win with defense and relentlessness.