In his second game back after a three-week absence from suffering a lacerated liver, Mount Carmel pitcher Nelson Munoz maneuvered his way to a 3-2 win over St. Laurence in Thursday’s Class 4A Reavis Sectional semifinal. 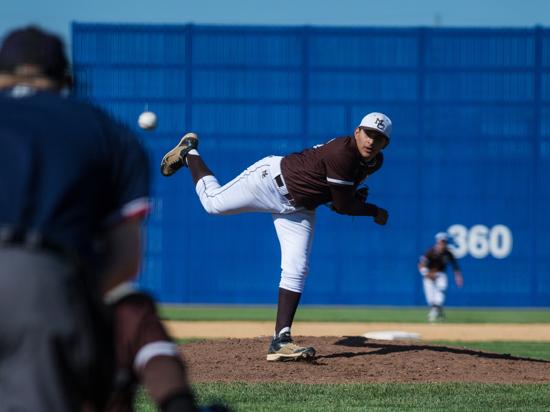 Nelson Munoz’s roller-coaster ride is back on the way up again.

The Mount Carmel junior was cruising along after beating Loyola in early May when he suffered a lacerated liver in an auto accident.

“I’m at the hospital a month ago with his family and at that point, all I cared about was him being OK,” Caravan coach Brian Hurry said.

“Baseball was the farthest thing from our mind. ... In all honesty, I didn’t think that he’d be pitching again this year.”

But after a layoff of about three weeks, Munoz returned to action and beat Argo in last week’s regional semifinal. On Thursday, he had an even bigger victory: 3-2 over St. Laurence in the Class 4A Reavis Sectional semifinals.

Munoz (6-2) maneuvered his way out of several jams with some help from his defense, which turned two double plays and threw two Vikings out at the plate.

But the biggest play was shortstop Jeremy Houston’s leaping grab of Mike Kornacker’s liner toward left-center in the first inning.

Instead of getting back one of the two runs they gave up in the top of the first, the Vikings (32-6) were kept off the scoreboard — where they stayed till the fifth.

“Oh my God, his hit and that catch turned the whole game,” Mount Carmel catcher/closer Scott Kapers said of Houston, who doubled home the game’s first run and then scored on Kapers’ two-out single.

Munoz appreciated Houston’s effort on Kornacker’s shot, too: “I thought it was going to the outfield.”

“Defense wins games, basically,” said Houston, who was 2-for-3. “We’ve been waiting for this moment. Couldn’t come this far and lose now.”

Neither could Munoz, who worked around seven hits and three walks in six innings. St. Laurence had its leadoff runner on base in five of those innings and put its first two men on in the fourth, fifth and sixth. But other than consecutive RBI singles by Mike Miller and Kornacker (2-for-4) in the fifth, St. Laurence had nothing to show for it.

“I had to throw strikes and keep the ball down,” Munoz said. “My curveball, I struggled on it a little bit, so I had to keep working on it.”

The Caravan got to Brad Wood (7-2) early with those two runs in the first and another in the second on Greg Ploszaj’s leadoff double, Nick Wheeler’s sacrifice and Ako Thomas’ RBI groundout.

“I feel like when we face teams that are throwing a little bit slower we have a harder time,” Kapers said. “But when kids are throwing harder and we have more competition on the mound. I feel like we come out a little tougher.”

Wood was plenty tough after Thomas’ RBI. He retired the last 16 batters he faced, finishing with a five-hitter, one walk and four strikeouts.

And Kapers also was tough. He replaced Munoz in the seventh and worked around Roger Wilson’s two-out single and stolen base to earn the save.

“We couldn’t execute at the end there, something we’ve been doing all season,” St. Laurence coach Pete Lotus said. “I’m extremely proud of our guys. ... They’ve won a lot of baseball games for St. Laurence the last couple years.

“The most disappointing thing is I don’t get to be around some of them [anymore] and they don’t get the experience of moving forward.”