More than half of the starters on Elmwood Park’s playoff team are scheduled to graduate this spring. 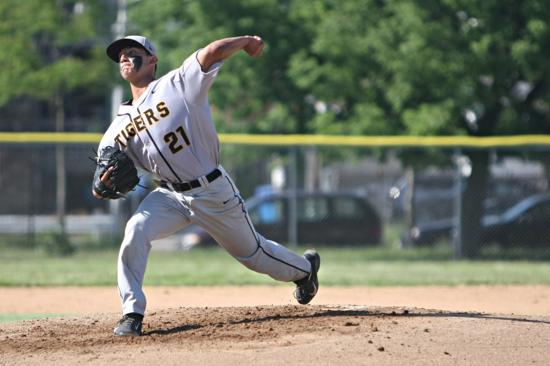 As a smaller school that will have five of its nine postseason starters graduating, Elmwood Park has holes to fill on its baseball team.

One thing that will help the Tigers is versatility. The team has several players who can handle multiple positions.

“That’s why we preach to these kids that they’re going to need to know more than one position,” Elmwood Park coach Zander DiGrino said. “If you want to play every day, be versatile.”

The Tigers lost their opening playoff game 11-5 to Riverside-Brookfield in the Class 3A regional semifinals May 28 at Clemente in Chicago.

Among those who will return next season, freshman Brandon Romero can play the outfield and first base, and is a hard-throwing left-handed pitcher. Corey Simmons and Alex Pankey will be seniors next season.

Simmons is a middle-of-the-order batter who is skilled on defense in left field. Against R-B, he caught two bombs on a dead run to keep the game close. Simmons, who also plays football, is athletic and plays corner outfield, third base and second base.

“It helps the team because it allows us to set our best lineup out there,” Simmons said. “Me going anywhere allows us to put our best players in the best positions. It just gives our team an advantage.”

Pankey played first base against Riverside-Brookfield. He also can pitch and play the outfield. He’s especially valuable at the plate, DiGrino said. Pankey hit a sharp single to right in the playoff game, and his offensive skills come from experience, practice and dropping basketball to focus solely on baseball.

“Just basic fundamentals,” Pankey said. “Once you put them into an at-bat, it will eventually show it in a game.”

Next year the Tigers will be without key players, including speedy outfielder Eddie Amparan and Diego Morales, a hard-hitting catcher who plans to play at Robert Morris. DiGrino said next year’s team could feature a slew of new freshmen and sophomores. Pankey and Simmons, as two of the returning seniors, said they will step up as team leaders.

“There’s going to be some growing pains for sure, having a young team out there,” Simmons said. “But, I’m sure we’ll be able to run together like we have in years past.”