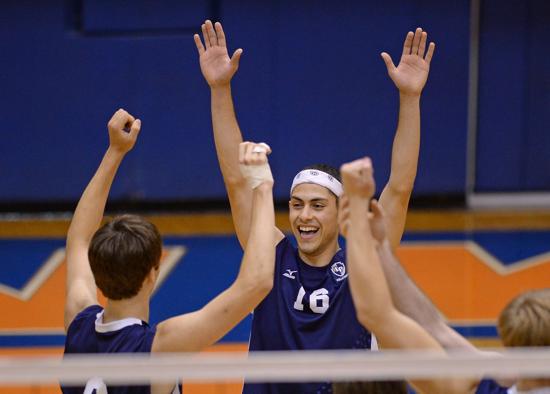 There’s something to be said for experience.

“We’ve been here before,” Lake Park coach Tim Murphy said. “I think that gave us a little bit of an advantage. We got rid of our nerves early in the match.

“I told the guys before the match that both teams are going to come out nervous, and that’s natural. Whichever team can get rid of those nerves and harness that energy, that adrenaline first was probably going to be more successful in the match.”

Lake Park used a 4-0 run to break an 11-11 tie in Game 1 and prompt a New Trier timeout. The Trevians pulled to within 18-16, but the Lancers closed on a 7-0 run featuring a pair of kills by Jeff Yost and a game-ending block by Derek Burke.

“I think Lake Park outplayed us on defense,” New Trier coach Sue Ellen Haak said. “There were balls we should have picked up and transition to offense. Defense is always the key in championship games and during long rallies.”

New Trier (32-8) took a 22-19 lead in Game 2 and appeared ready to force a third game, but kills by Quin Krisik and Sean Moore pulled Lake Park even at 22. A kill by Terry Dominick and Krisik’s tip capped a 5-0 run and gave Lake Park match point, but a service error and Eric Gantner’s ace got New Trier even at 24.

Moore’s putaway of an overpass and his block at match point sent New Trier to its third loss in four tries against the Lancers this season.

“I just wanted to close the block,” Moore said. “They’d been hitting seams. I knew the outside liked to hit seams and I knew I had to close. I had good hand position, I pressed low and luckily I had my hands in the right spot.”

“We’re kind of opposites [from Lake Park],” New Trier senior middle hitter Jack Serrino said. “We’re a little bit slower team and they’re a really quick team. We’re a little more pensive about where we’re going to hit the ball. They just get up quick and hit it straight down the middle of the court.

​“We didn’t play our best game. If we came out more aggressively, I think it would have gone our way a little bit more. It would have been a longer game, that’s for sure.”