St. Charles East graduate and Kansas pitcher Wes Benjamin, who underwent Tommy John surgery this year, was picked by the Texas Rangers in the fifth round of the MLB draft on Friday. The left-hander is scheduled to report to Surprise, Ariz., the organization’s headquarters, after he signs. 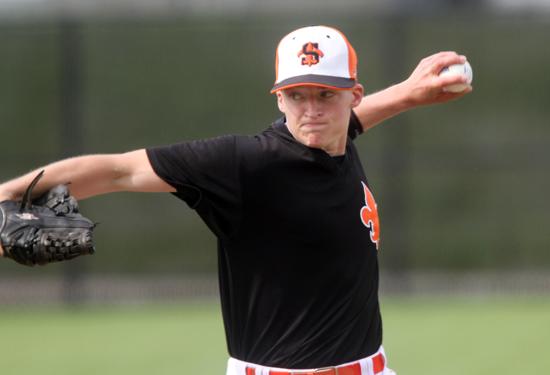 “More and more teams are not shying away from players who have had Tommy John surgery, and are even embracing the idea of drafting players and the Rangers did and I’m very grateful,” Wes Benjamin said. | Donnell Collins/For Sun-Times Media

The stigma once associated with Tommy John elbow surgery has diminished so much now that MLB teams no longer have qualms about drafting players who just went through the process.

Nevertheless, it’s still a surprise to be drafted early after such an ordeal and neither St. Charles East graduate Wes Benjamin nor his family could have been more pleased or surprised when the Texas Rangers selected the former Saints and Kansas pitcher in the fifth round Friday.

“More and more teams are not shying away from players who have had Tommy John surgery, and are even embracing the idea of drafting players and the Rangers did and I’m very grateful,” Benjamin said. “I had heard numerous things before the draft, that it was possible. Before being injured I had heard top three rounds so I was trying to keep my head on straight and not think about the process until maybe a month before the surgery.”

And now? Well, it seems appropriate that Benjamin is scheduled to report to Surprise, Ariz., the organization’s headquarters, after he signs.

Then he needed surgery after the ulnar collateral ligament in his left elbow snapped.

“The rehab is going to be a lengthy process, so I have a lot of work ahead,” he said. “Some pitchers recover as quick as nine months. I won’t do that path. I want to do it right the first time. It will be at least a year for me. Normal protocol is 12 to 15 months.”

Benjamin thanked the entire Kansas program for the support he received in the weeks after the injury and during the start of his rehab.

“Everyone was wishing the best for me, and so it was great to have a second family in Kansas,” He said. “With the support I had, as soon as everyone found out about the surgery it was like someone had died. The support and love I had from everyone there was amazing.”

Benjamin said he couldn’t talk immediately about the money he can expect as a fifth-rounder, but that it won’t be the premium salary for his draft slot due to the injury.

“Honestly, that doesn’t bother me,” he said. “I’m just happy to be drafted and elated it’s this high.”

Benjamin is a pre-physical therapy major, and showed he has at least maintained his sense of humor through this ordeal when talking about his education.

“I guess with this major I can diagnose myself,” he said.