St. Charles East's overcame a one goal deficit at halftime with three second-half goals to earn a 3-1 victory over Lincoln-Way North in a Class 3A state semifinal on Friday. 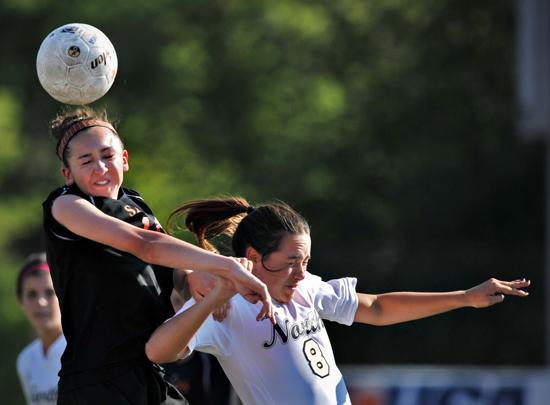 Lincoln-Way North delivered a stunning opening blow. For 40 minutes, St. Charles East was on the wrong side of the score and wondered if opportunity might slip through its grasp.

The Saints have been resilient and forceful throughout the state tournament. The team knows not to panic. "The trust that we have in each other right now is through the roof," senior midfielder Amanda Hilton said.

St. Charles East refined its game and found a groove.

Hilton scored on a header in the 44th minute and Anna Corirosi scored two minutes later to propel the No. 5 Saints to a 3-1 victory over the No. 4 Phoenix in a Class 3A state semifinal at North Central College in Naperville on Friday.

"Once we got that first one, the momentum completely switched and I knew it was ours," senior defender Shannon Rasmussen said. She delivered the dagger in the 77th minute by blasting a free kick from 12 yards out into the lower left corner for the game's final margin.

St. Charles East (19-4-5) extended its unbeaten streak to 15 games in qualifying for the state championship on Saturday. This is the Saints' first state title appearance since St. Charles split into separate programs at East and St. Charles North in 2000.

The Saints dominated possession time and shot opportunities though trailed 1-0 as Phoenix sophomore forward Rachel Pappas punched in her own rebound in the seventh minute for the opening score.

Off a throw in from junior midfielder Valen Manns, Pappas controlled the ball. After her first shot was blocked, she reloaded and drilled a low ball into the left corner for her team-best 22nd goal for the Phoenix (22-4-1).

From there, the Saints mounted a constant pressure that put the Phoenix on its heels, forcing Lincoln-Way North to match their speed, intensity and ball possession. St. Charles East took its pressure to another level.

"We've had plenty of those games where we dominated but didn't score," East forward Darcy Cunningham said. "We didn't put our heads down. We are a possession style team and we just needed to be more patient."

The breakthrough arrived at the start of the second half. Sustaining its possessive style, St. Charles East defender Mallory Moltenhauler advanced the ball down the right side and lofted a ball into the box that Hilton finished with a decisive blow.

"The ball came in and I saw it, and I got a good head on it, and I was thankful it went in," Hilton said of her 17th goal. Lincoln-Way North's lead vanished, and the Hilton score only heightened its vulnerability.

Less than two minutes later, Corirosi provided the Saints' first lead by adroitly recovering her first shot and drilling a follow up blast from about 14 yards out. "Amanda put a great one away, and we knew at that point we needed another one, and the ball came back to my feet and I shot it and it went in," Corirosi said.

Lincoln-Way North could not mount an effective counter. The withering pressure St. Charles East applied wore out the Phoenix. The Saints effectively utilized the wider field to maintain their dominance.

"They were all over us," Phoenix coach Mike Murphy said. "That's by far the best team we've played this year. But credit our girls, too, because we battled, got the early lead and held it for 40 minutes.

"The third [goal] I didn't care about, but the first two really deflated us, and by then we were gassed and tired."