Jackson Nagle had 11 kills, Kyler Kotsakis added 10 and Parker Swartz had six as Glenbard West advanced to Saturday’s 11 a.m. semifinal against Warren with a 25-15, 25-18 victory over Morton. 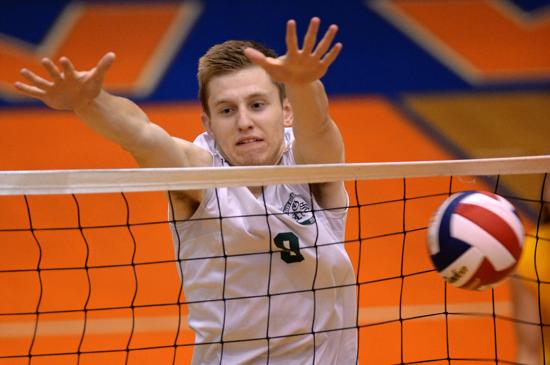 Glenbard West had two advantages over Morton in the final state quarterfinal Friday in Hoffman Estates: a trio of lefties and an abundance of height.

“When we did execute, we were able to put balls away,” Morton coach Tony Hornilla said. “It’s just the left hand is something difficult to get used to. They have three of them coming at you from different sides. That’s something we haven’t seen. We tried to simulate it in practice, but it’s not the same.

“Plus they’re really tall, too. I didn’t know that they were that tall until we got on the floor.”

Both games were tight early, but the Hilltoppers eventually wore down the shorter Mustangs, whose leading attacker was 6-foot middle hitter Daniel Ibarra.

“We’re outsized no matter who we play,” Hornilla said. “We’re used to that. We were with them up to a certain point, then they pulled away and we kept chipping away. They just kept that lead and we couldn’t do anything about it.”

“We’ve been playing a lot of different kinds of teams, and Morton is such a scrappy team,” Glenbard West libero Ryan Condon said. “They’re very smart, too. We’re used to more powerful volleyball and getting good blocks against big hitters. We hadn’t played a scrappy team for a while.”

Morton (22-10) was able to hang around a little longer in Game 2 thanks to the emotional lift provided by a huge crowd of maroon-clad fans. Glenbard West also aided the Mustangs’ cause with a few ill-placed hitting attempts.

“There were a couple of unforced errors form everybody, and communication was a little lacking at that point,” Nagle said. “We were like, ‘We beat them the first game, so we can do it again. Just play the way we usually do.’ We picked it up and kept the ball in the court.”

“We tried our hardest,” he said. “They deserved it. They played well. They’re a good team, too. I hope they go to the finals.”