St. Rita pitcher Mike Costanzo limited Mount Carmel to two runs over six innings and the Mustangs held on for a 4-3 win Saturday to claim the Class 4A Reavis Sectional championship. 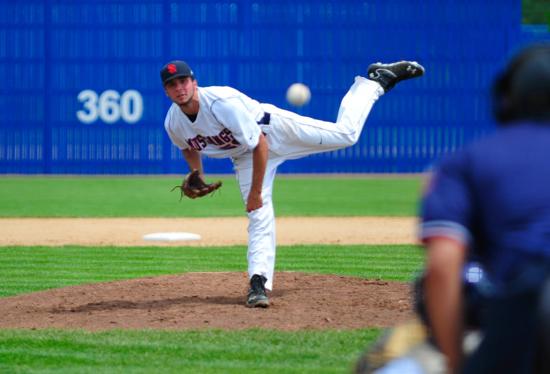 Mount Carmel, however, had the senior left-hander’s number.

The Caravan beat Costanzo three times, including a 12-4 romp May 17.

“I’ve been lit up all three times,” said Costanzo, who has won 28 games in his varsity career. “I’ve been tattooed.”

That changed Saturday during the biggest game of the season. Costanzo limited Mount Carmel to two runs over six innings and St. Rita held on for a 4-3 win to claim the Class 4A Reavis Sectional championship.

“I couldn’t eat this morning and I woke up at 6 [a.m.] and couldn’t get back to sleep,” said Costanzo, who allowed four hits, four walks and struck out two. “That team is no joke over there. That’s one of the best lineups we faced all year.”

A fielding error by Costanzo in the top of the first inning allowed Mount Carmel (31-8) to grab a 1-0 lead.

St. Rita tied the game in its half of the first against starter Marko Boricich. Tyler Halas blooped a single to score Danny Gleaves (2-for-2) to knot the game 1-1.

The Mustangs took the lead for good in the second, thanks to a Caravan error that made it 2-1.

St. Rita opened up a 4-1 lead in the fourth. Shane Peisker’s RBI single made it 3-1 and Halas’ fielder’s choice upped the advantage to 4-1.

“The last two or three weeks we’ve been playing great baseball, great defense,” Mount Carmel coach Brian Hurry said. “A couple of plays we didn’t make were uncharacteristic for us.”

The Caravan committed three errors on the day.

“When they got that first hit up the middle [Houston RBI single], I thought I’d get the next guy,” Shepski said. “But they kept getting guys on.”

That is, until Shepski was able to get Scott Kapers to pop out to shortstop Marty Bechina to end the game.

“We had the tying and winning runs on base,” Hurry said. “I’m proud of the way the kids kept battling.”