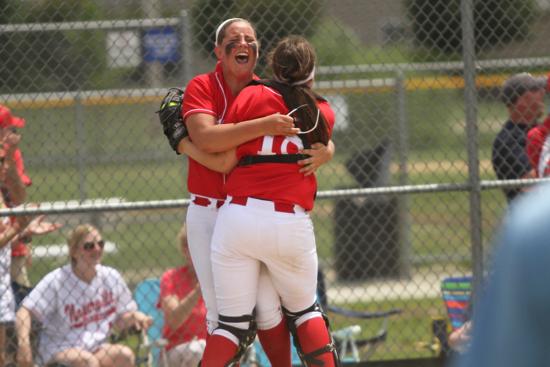 Keegan Hayes pitched a gem, teammate Julie Kestas polished that gem off, and between them, the two Naperville Central pitchers managed something that no pitchers had done all season.

They shut out Downers Grove South.

Hayes retired 17 of the first 18 batters she faced in Saturday’s Class 4A Oswego East Sectional championship game before Kestas struck out two in relief to close Central’s 4-0 win over the Mustangs.

In the process, fourth-seeded Central (27-7) ended two streaks for second-seeded South (33-3), which had gone 35 games without being shut out this year and had not lost to the Redhawks in three previous meetings.

“We haven’t beaten them in two years,” Hayes said. “This game meant so much to us. We remember what happened last year and it motivated us the entire season. We knew we had to push hard every inning because [South] has a record of scoring late in every game.”

The win sends the Redhawks to Monday’s North Central College supersectional against Sandburg.

Naperville Central (27-7) led 2-0 when Maddi Doane singled to lead off the game and later scored on Lisa Tassi’s two-out single. Hayes followed with a two-out RBI single that scored Tassi. Central scored in the third inning on a two-out double from Megan Nerger that scored Tassi, and got its fourth run in the fifth when a base running error turned to gold.

“It’s an amazing feeling,” Tassi said. “I can’t even explain it. If we can win on Monday it would keep an amazing journey going for this team.”

With the bases loaded, Nerger inadvertently took off from first base on a pitch. Downers Grove South threw to first, but the return throw home was too late to get Lindsey Gonzalez, who scampered in from third.

Hayes struck out her fourth and fifth batters in the bottom of the fifth and got a flyout to end the sixth with two runners on base. Hayes mixed up her speeds and consistently hit the corner with her curve in keeping the shutout.

“Keegan was tremendous,” Naperville Central coach Andy Nussbaum said. “We told [Kestas] to be ready but Keegan just kept going. And then [Kestas] came in late and did a great job.”

South singled twice in its last at-bats, and that’s when Nussbaum replaced the crafty Hayes with the hard-throwing Kestas, who fanned both hitters she faced to end the game.

South beat Central 6-2 in April by scoring six runs in the sixth, but the Mustangs’ potent offense had no answer Saturday. Central earned an 11-4 edge in hits.

“[Hayes] pitched a great game and they played very well,” South coach Ron Havelka said. “We’ve come back on them in the past but today we just couldn’t muster anything together.”