Junior shortstop Taylor Arends lined a two-out, two-run single in the fifth inning to snap a tie and help give OPRF a 3-2 win over Trinity in Saturday’s 4A Trinity softball sectional title game. 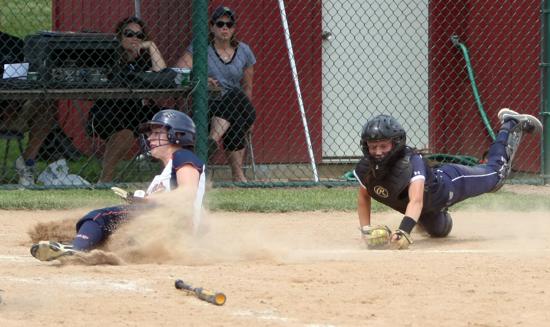 RIVER GROVE — In a game with several tense moments, it was Oak Park-River Forest who could relax at the finish.

Junior shortstop Taylor Arends lined a two-out, two-run single in the fifth inning to snap a tie and help give OPRF a 3-2 win over Trinity in Saturday’s 4A Trinity softball sectional title game.

Trailing 1-0, second-seeded OPRF (27-9) scored all three of its runs in the bottom of the fifth. The rally began as senior Emma Baldwin reached on an error and senior Elaine Warner singled. Two batters later, senior Annelise Ryan grounded into a fielder’s choice, scoring Baldwin. After a groundout put runners at second and third, Arends delivered her hit.

“You have to get on base,” Arends said. “A fly ball is good with one out, but it doesn’t work with two. I just wanted to find someway to get on base, either through the infield or over the infield, and it worked.”

Trinity answered with a solo home run by senior Michela Williams with one out in the seventh that pulled the Blazers to within one.

But Baldwin got a pop-out and a strikeout to end the game. She struck out eight and allowed two runs on three hits and no walks.

“I just had to be careful with every pitch I pitch and every batter,” Baldwin said. “I know who I’m facing, so I have to pitch around their strengths. I kind of missed on that last curve at the end, but it happens.”

Sophomore pitcher Cortlyn Kelly kept No. 4 seed Trinity (23-13-1) in the game until the end. She worked out of jams in the third, fourth and sixth when OPRF had runners in scoring position. She struck out one and allowed three runs on five hits and two walks.

The game was a flip-flop of last year’s sectional semifinals, when Trinity beat OPRF 3-2 to advance to the sectional final.

“I told my seniors, walk away proud,” Trinity coach Bob Osborne said. “We were in the sectional championship last year with a lot more talent. This year, we were really the underdogs. They took that role and ran with it. We’re happy with the game.”

The Huskies will face Glenbard North at the Rosemont Supersectional at 6:30 p.m. Monday.

“It feels so good,” Arends said. “It got a little too close for me at the end, not so comfortable. But winning a close game always feels better than winning a not-so-close game. It feels wonderful, and I’m really excited for Monday.”