Last year, Naperville Central advanced to the championship game in the Lacrosse Cup Class B playoffs, but was forced to play without its top player, senior Ryan Porter, who was injured on a cross-check against Warren in the quarterfinals. 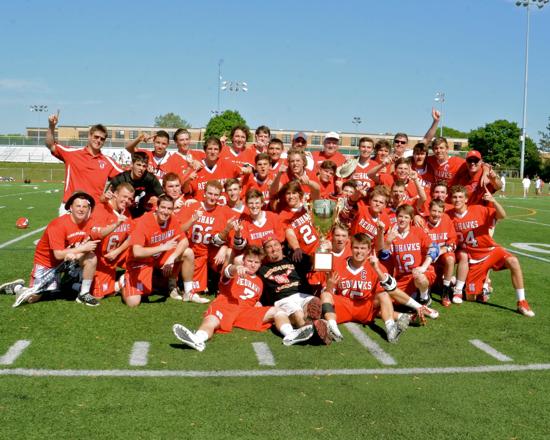 Last year, Naperville Central advanced to the championship game in the Lacrosse Cup Class B playoffs, but was forced to play without its top player, senior Ryan Porter, who was injured on a cross-check against Warren in the quarterfinals.

“We won that one for Ryan,” Naperville Central coach Tim Hurst said. “It was a motivating factor for us for sure. We basically had a huge returning group from last year and it was on their minds when we first played them and obviously on their minds going into the championship game, even though Ryan wasn’t present at the game.”

“We knew the championship was going to be a dogfight,” Hurst said. “It’s kind of like playing against yourself because we both run similar offenses and defenses. It was just a grind. I don’t think that we played our best lacrosse, but we had the experience of being here last year and having played them two weeks ago.”

“It was a huge win and definitely a bit of a payback thing,” Borgetti said. “Although we were playing for ourselves, it was also winning a state championship in honor of Ryan Porter. We came into the game against Warren at full strength and I think all of us were as ready.”

Naperville Central (11-7) played at its best in the semifinals, beating Grayslake Central, 14-6. When the two teams played in April, the Redhawks needed four overtimes to survive, 9-8.

“That was the absolute best lacrosse of our season,” Hurst said. “That’s a very good team and we really stepped up and made a statement. It was the best lacrosse we’ve played in my three years here.”

Naperville Central’s road to a championship began with preseason games against Class A champ New Trier, runner-up Loyola Academy as well as perennial power Glenbrook North, as well as six other Class A opponents.

“Loyola assistant coach Eric Genova has really taken me under his wing as a coaching mentor,” Hurst said. “We definitely played a difficult schedule, but we wanted to put the boys in a position where they could see what top-level lacrosse looks like.”

The lumps of a 1-5 record against Class A teams ended up as a positive.

“It gave us a sense of where we need to be to win a state championship,” senior Andrew Flanagan said.

“New Trier and Loyola are in the state finals every year and to learn their fundamentals and schemes really helped us. I think we looked at them almost as role models.”

Now, they can look at each other as champions.

“This is the best feeling,” Flanagan said. “Especially with playing against other guys in the area in travel lacrosse. State champions is the best bragging rights.”