South Elgin erased a three-run deficit with a four-run third inning and cruised to an 8-3 win over top-seeded Batavia in a Class 4A Schaumburg Sectional on Saturday. 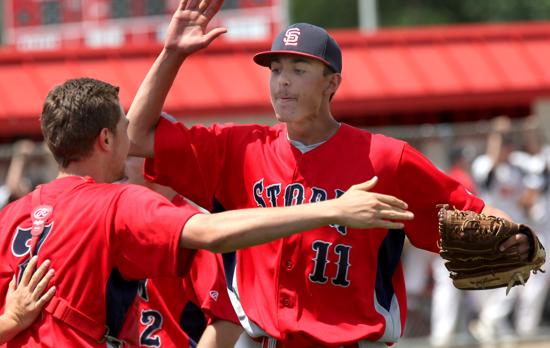 At the time of the sectional seeding meetings, South Elgin’s body of work only allowed the Storm the 10th seed in the Class 4A Schaumburg Sectional.

In the sectional title game, the Storm faced a formidable foe in top-seeded Batavia, which entered riding a 24-game winning streak. But Saturday belonged to the Storm.

They erased a three-run deficit with a four-run third inning and cruised to an 8-3 win and the program’s first-ever sectional title. South Elgin will face Evanston in the supersectional at 6:30 p.m. Monday at Schaumburg Boomers Stadium.

“The kids believe in themselves right now and there’s no quit in them,” South Elgin coach Jim Kating said. “It just shows our perseverance in terms of being down and believing in themselves and coming back against a quality team.”

Batavia (32-4-1) jumped out early as Laren Eustace led off the bottom of the first and scored on Jeremy Schoessling’s single. Schoessling later scored on an error. After South Elgin’s Justin Bryski blasted a solo home run in the top of the second inning, Eustace’s groundout in the bottom of half plated Andrew Siegler to make it 3-1 with Colby Green pitching.

The first time Green faced the Storm this season he threw a no-hitter. He tossed a one-hitter in last Saturday’s regional title win over Willowbrook. This time, though, South Elgin (23-10-2) got to Green.

Instead of turning what would have been an inning-ending double play, the Bulldogs committed two errors to keep the inning alive.

“That’s exactly what we talked about that we can’t do,” Batavia coach Matt Holm said. “We’re trying to turn a double play to get out of the inning and all of a sudden it turns into a four-run inning.”

All four runs were unearned. Kyle Hays, the No. 9 hitter, delivered the big blow, a two-run double that gave the Storm a 5-3 lead.

“He threw me a fastball that caught a lot of the plate,” Hays said. “I just took it to right-center field. It’s a great feeling to get the lead and being able to win a sectional. It’s unbelievable.”

Batavia had chances to come back. In both the fourth and fifth innings, the Bulldogs led off with singles. A runner was thrown out at the plate in each inning.

Meanwhile, Max Keough and Tyler Brown combined to allow no runs in the final five innings to preserve the lead.

“For the last 20 or 22 games, we’ve been playing very good baseball,” Kating said. “It’s starting to show in the confidence, in believing in each other. The family that is starting to form is difficult to describe. I think that’s why we’re playing so well.”

It was a bitter end to a record-setting season for Batavia. The Upstate Eight River champions set a school record with 32 wins.

“The message is that when you set your goals that high, it’s going to hurt if you don’t reach them,” Holm said. “You earn that right to hurt. These guys have invested so much that they have the right to hurt for a little while. Then they can take a step back and look at it and say, ‘That was unbelievable.’”