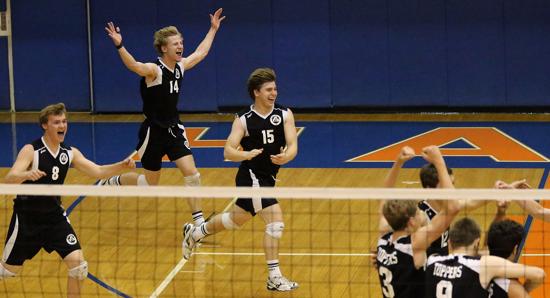 There was some concern among the Glenbard West coaching staff how the Hilltoppers would bounce back from their disappointing semifinal loss to Warren earlier in the day.

They need not have worried.

Kotsakis, who had nine kills in the semifinal loss and 10 in the quarterfinals to lead the Hilltoppers, said the sophomores and juniors wanted to send the team’s six seniors out on a high note.

“It was pretty disappointing this morning,” Kotsakis said. “I think we were the better team, we just didn’t pull it together. We went back to the hotel, regrouped and did some team bonding stuff. We wanted to do it for the seniors. We wanted to end it with a win.”

“I’ve been serving the same spot every game, not serving across the court. I line up so they know exactly where I’m going.  I think I get in their head that way. I just forget about everything and just serve, and it’s been working. So it was great to see that run happen.”

Glenbard West, which was stunned by Warren 25-16, 22-25, 25-21 earlier in the day, used a 10-4 run to break open Game 2. Junior Jackson Nagle contributed six kills and junior Parker Swartz and Peter Scruggs both had five.

“We just wanted to end on a win,” Kotsakis said. “I think place is more satisfying than losing in the championship. Lincoln-Way East is a really good team. It would have been a good match. I think it was a good day. We ended it well.”

“We haven’t been the best team in third- and fourth-place matches throughout the season,” Lake Park coach Tim Murphy said. “Both teams had heartbreakers this morning. I told the guys whoever wants it more is going to get it this afternoon. Whoever can recoup in that in between time and kind of battle back was going to get the job done.