Get the latest recruiting news on the area’s top prospects, including Bolingbrook's Jacob and Julian Huff committing to Minnesota. 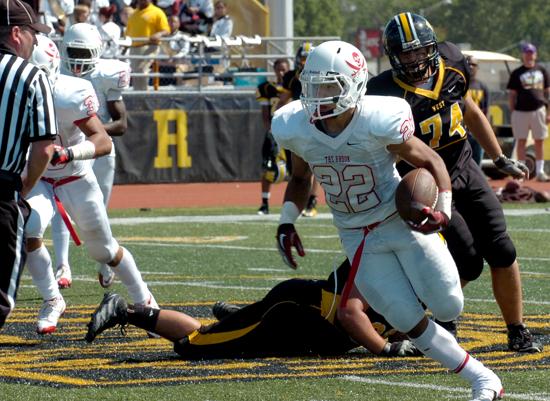 Bolingbrook’s Jacob and Julian Huff will continue to make college football a family affair after both committed to Minnesota.

Jacob, a defensive back, and his twin brother Julian, a linebacker, didn’t make it a requirement that they play together at the same level but drew interest from similar schools.

“It felt great having options,’’ Julian said. ‘‘I spent a lot of time these past three years worrying about where I’m going to college and how I am going to get there. It’s really humbling to know that through faith, all things are possible.”

When the twins had had enough time to consider all their options, they decided to put an end to their recruiting process. Jacob decided he wanted to commit first, and casually told his brother. After a few days, Julian decided that Minnesota was the right fit for him as well.

They committed to Minnesota head coach Jerry Kill one after the other on the phone to. Now that they have given their verbal pledge to the Gophers, Jacob and Julian can look back on the recruiting process as a unique experience shared between brothers.

The recruiting process is also in the books for Scout.com three-star wide receiver Flynn Nagel of Lemont, who announced his verbal commitment to Duke.

One week ago, Nagel visited the Blue Devils for the first time.

"Duke was awesome, just like everyone talked about," Nagel said. "The campus was awesome, the coaches were really nice people and talked about character a lot. They actually have players run practices, and that says something about the program in general."

Nagel received an offer from Duke head coach David Cutcliffe shortly after returning home from his visit. He committed after talking it over with his family. Nagel tweeted about his commitment.

"After many long talks with my family and many prayers, I am excited to announce that I have committed to Duke University," Nagel said on Twitter..

“I couldn’t even find the words to say how excited I was when Wisconsin offered because they are a school I really wanted an offer from,” Stringer said. “Growing up a Big Ten fan, I’ve always rooted for Wisconsin.”The 6-3, 210-pound prospect recorded 40 tackles and four forced fumbles for the Warriors as a junior. One of the reasons that the Badgers stick out for Stringer is the relationship that he has built with his main recruiter, offensive line coach T.J. Woods.

“[Woods] really surprised me,’’ Stringer said. ‘‘He actually told my mom first that they were going to offer. He got to know her well, not just on a football level. That is really important.”