Lincoln-Way East rallied from a Game 1 loss and turned back a furious Warren rally in Game 2 to defeat the Blue Devils 22-25, 26-24, 25-19 in the championship match of the boys volleyball state tournament Saturday at Hoffman Estates. 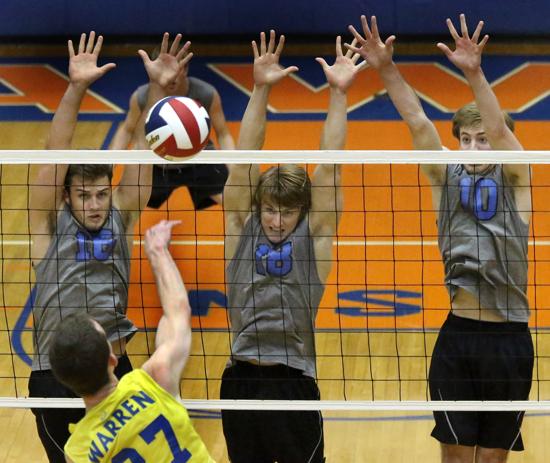 “Not at all,” said the Lincoln-Way East senior. “Not for a second. We won 40 games together. I didn’t doubt these guys for a second.”

Lincoln-Way East rallied from a Game 1 loss and turned back a furious Warren rally in Game 2 to defeat the Blue Devils 22-25, 26-24, 25-19 in the championship match of the boys volleyball state tournament Saturday at Hoffman Estates.

As they had all season, Van Dellen and Ryan Vorderer led the Griffins (41-1) with 18 and 11 kills, respectively.

“The opportunities were there,” Van Dellen said. “Austin (Royer) was fooling the block pretty well and I was able to capitalize. I tried to mix it up and keep them on their toes, and it worked out.”

Warren (28-14), which was trying to become the second consecutive state champion with double-digit losses, shocked the Griffins in Game 1, building a 19-14 lead then closing on a 5-2 run after Lincoln-Way East pulled even at 20-20.

“No matter what team it is, if you have enough energy you can beat any team and we saw that at our tournament when Lincoln-Way North beat Lincoln-Way East,” Warren setter Arvind Kouta said. “We knew we could bring energy and we did, and we definitely gave them a good game.”

“I shared with the squad right between the second and third set, what I love about this squad is its resilience,” Warren coach Yun Chen said. “This is a resilient group. We always try to fight back, even when we’re down so many points. We believe in each other that we’re going to push back.”

But it was Lincoln-Way East that pushed first in Game 3, racing to a 9-2 lead. Warren never got closer than five points the rest of the way.

“As soon as Game 2 ended, I told the guys that if they come out right now and jump on them, we’ll come home state champions,” Lincoln-Way East coach Kris Fiore said. “[Warren] fought back so hard in Game 2, they had to feel deflated for having their chance and not being able to capitalize.”

Aaron Redweik added seven kills and Carson Slager had six for the Griffins. Royer dished out 41 assists and Josh Phalen had a match-high 13 digs.