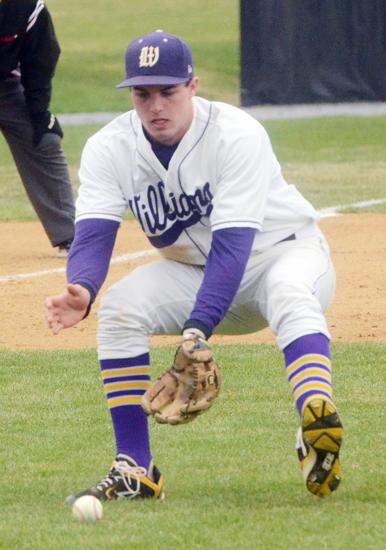 Cloud, a Wilmette native, was the only freshman on either all-NESCAC team. He played in all 29 games for the Ephs. He led the team in triples (four), batting average (.402) and slugging percentage (.526), and finished first among regulars in on-base percentage (.463). He finished second on the team in RBI (22) and walks (11).

Cook, a Winnetka native, helped lead the Lord Jeffs to a 30-11 record, including a 9-3 NESCAC mark. He finished the season with a 1.95 ERA, a 5-3 record and two complete games in nine starts. He led the team in strikeouts with 67, finished second in innings pitched with 64 2/3, walked only six batters all season and held opposing batters to a .227 average.

New Trier graduate Eric West was a teammate of Cook’s at Amherst. The junior first baseman and third baseman started 22 games and appeared in 24. He finished the season a .256 batting average, a .306 on-base percentage and a .372 slugging percentage.

Cori Coleman, a Hinsdale South alumna and junior catcher for the Brandeis softball team, helped the Judges earn the No. 2 seed in the Eastern College Athletic Conference New England Division III softball tournament and make a run to the tournament semifinals. The team eventually fell to No. 1-seed Worcester Polytechnic Institute May 10, but Coleman did her part to keep the Judges in the game. She hit a two-RBI single in the fifth inning to close WPI’s lead to 6-3.