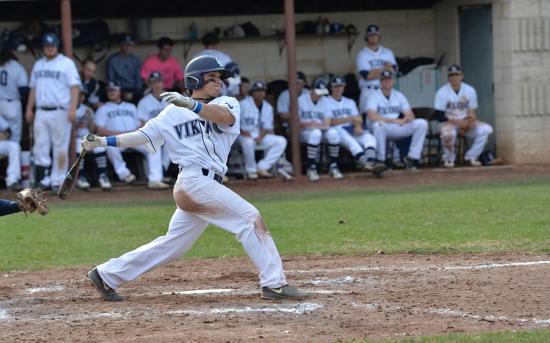 Gordon, a center fielder from Wilmette, led the Vikings in batting average (.400), on-base percentage (.439), runs scored (30), total bases (68) and stolen bases (10). He started in all 33 of the team’s games and set a school record with 54 hits. He also tied the school record for hits in a game with five against Carroll on April 16.

A junior outfielder from Buffalo Grove, Martin was the team leader with a .392 slugging percentage, 45 hits and 17 stolen bases, and tied for the team lead with 22 runs. He was second on the team with a .304 batting average and .384 on-base percentage. Martin was one of three Crimson players to play in each of the team’s 39 games.

Fellow Illini golfer Stephanie Miller, who won two state championships at  Stevenson, made it to the NCAA Central Regional as a freshman. She placed 51st in her postseason debut. Miller led all Illini during the 2013-2014 season with a 75-stroke average.

Carleton College junior pitcher Sam Cattau appeared in seven games for the Knights this spring and finished with a 6.57 ERA in 12 1/3 innings. Cattau, a Park Ridge native who attended Walther Lutheran, held opposing batters to a .229 average.