With Sarah Herold striking out eight at the Class 4A North Central College Supersectional, a Sandburg team with 15 losses won 4-2 over a Naperville Central edition that entered the season with the Sun-Times’ top ranking. 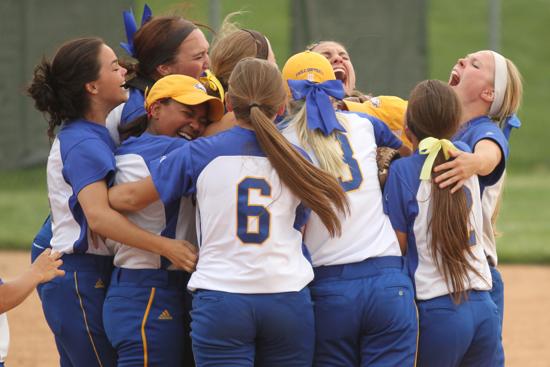 Sandburg hails from Orland Park, a south suburb in the heart of White Sox country, but Sandburg pitcher Sarah Herold used a North Side analogy Monday.

“Even the Cubs won a hundred years ago in the playoffs, when no one was probably expecting it,” Herold said. “I consider us an underdog, too, and we’re going to state.”

With Herold striking out eight at the Class 4A North Central College Supersectional, a Sandburg team with 15 losses won 4-2 over a Naperville Central edition that entered the season with the Sun-Times’ top ranking.

Unlike the Cubs, Sandburg (23-15) hasn’t gone a hundred years without a title. The Eagles won a Class 4A championship in 2010.

“The key was the belief,” Sandburg coach Jim Fabianski said. “In nine years, we’ve been to five supersectionals and we’ve won two of them. We were snakebit last year, but our six seniors had a preseason meeting, and all they wanted was to come back and get another shot before they left.”

Monday’s pivotal inning may have been the first. After Naperville Central (27-8) went down in order, Eagles leadoff hitter Brianna Soltis was hit by a pitch. Katherine Krzus singled and Maddie Hanley walked before a sacrifice fly from Karli McLaughlin scored Soltis from third.

That’s when Kristen Zarate grabbed the spotlight. With two outs, the left-handed junior laced a double into the left-center gap that scored two more runs.

“You don’t want to start a game out that way, and the key hit was the two-out double,” Central coach Andy Nussbaum said. “If we could have held them to one (run) in that inning, we’re in OK shape. But you pitch differently and hit differently when you’re down three runs in a winner-take-all game. There’s more pressure on you.”

Herold cruised through four innings, holding a formidable Central offense to two hits. The Redhawks scored both of their runs in the fifth on a two-RBI single by Kaitlyn Skarecky, but Herold largely stymied the Redhawks.

“Definitely my screwball and my riseball were working,” Herold said. “I got some girls fishing for my riseball, which was nice.”

The Eagles got their fourth run in the fourth inning on a single from Soltis that scored shortstop Cierra Adamus. Central center fielder Maddi Doane threw out a runner in the fifth.

Sandburg’s Emily Griskell relieved Herold in the sixth. Doane and Lindsey Gonzalez were aboard with no outs when Griskell made a great stop on a ball hit hard by Skarecky, then threw to third for a force.

The next batter hit a line drive to Adamus, who doubled a runner off second to end the game and send Sandburg to the state finals for the 12th time in program history.

“It’s my senior year and I get to go downstate,” Herold said. “It’s an awesome feeling.”