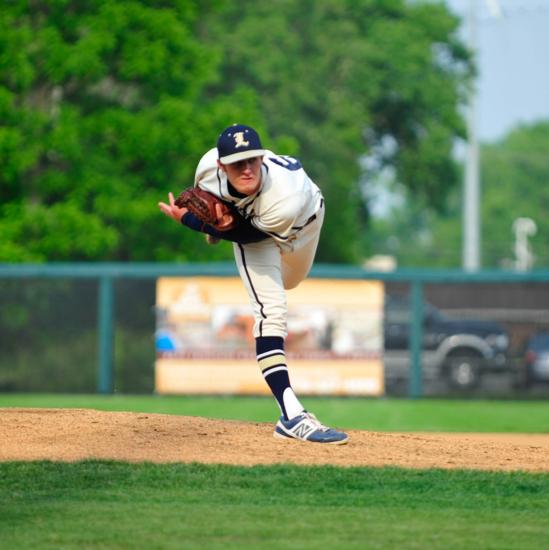 It's been a whirlwind few days for Jake Latz and his Lemont teammates.

They're on the longest postseason run in Indians baseball history and on Saturday, Latz and his battery mate, Mike Papierski, were drafted by the Toronto Blue Jays.

On Monday, Latz's pitching and Papierski's hitting helped Lemont advance to the Class 3A Final Four with an 11-1, six-inning victory over De La Salle in a supersectional at Standard Bank Stadium.

The Indians (33-5), who had not won a sectional before this season, play Metamora Friday at 10 a.m. at Silver Cross Field in the 3A semifinals.

They got there with a familiar formula. Latz (9-0) struck out nine, walked one and allowed a run (unearned) on three hits over 5 1/3 innings.

"I felt good," he said. "I was able to establish the fastball early and get that going. Once I started mixing pitches, it was good. I kept them off balance."

Papierski called it a typical effort for the Indians' ace.

"His velocity was up there, his curveball was OK," Papierski said. "At times he didn't have the best curveball, but his changeup was on. So we had two pitches working."

That was more than enough, as Lemont coach Brian Storako noted.

"Typical to the point (that) he doesn't give up many runs or many hits," Storako said. "He was a little all over the place, but that could be a number of things. He's got a lot of pressure on him, big decisions here and there. But he battled and did what he has been doing all year."

"He's very good," De La Salle coach Mark Higgins said. "We've seen some pretty good arms over the course of the year in our league. He rates right up there."

And the Indians gave him an early cushion, scoring three in the bottom of the first off De La Salle starter Alex Padilla (7-4). Papierski tripled home Danny Dowiarz and scored on a passed ball, and Nick Wisz added an RBI single.

"(Padilla) threw the ball well," Lemont's Mike Wisz said. "We're just glad we could get to him, hit some balls hard and get some runs. ... It always takes the pressure off."

De La Salle (24-14) got a run back on James Baran's two-out RBI single in the second, but that was all Latz and reliever Charlie Wright gave up.

Meanwhile. Lemont was pulling away with a run in the third and four in the fourth, when Papierski had an RBI double and Nick Wisz added a run-scoring single. Mike Wisz's two-run double in the fifth made it 10-1 and Brett Twohill's RBI single in the sixth ended it.

Watch more from this game on High School Cube