Pitcher Jake Shepski wriggled out of a big jam in the sixth inning to help St. Rita advance to the Class 4A state semifinals. 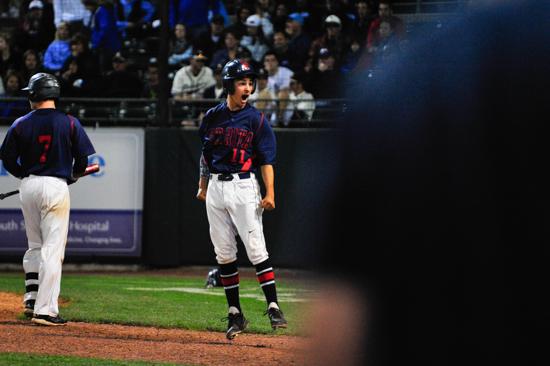 Jake Shepski didn't expect it to be easy, getting back to state, and it wasn't.

But Shepski and his St. Rita teammates worked around some calls that didn't go their way and managed to earn a trip to the Class 4A state semifinals by edging Downers Grove South 2-1 Monday night in a supersectional at Standard Bank Stadium in Crestwood.

Shepski helped get St. Rita there by throwing a five-hitter and keeping his team in the game when it could have gone the other way very quickly.

It was scoreless going into the top of the sixth when Downers South (29-9) finally broke through. With one out, Zac Taylor walked and stole second. He was then caught off second, but in the ensuing rundown, St. Rita third baseman Tyler Halas was called for obstruction, giving Taylor third base.

After a walk to Joe Becht, Danny Orlando doubled home Taylor. An intentional walk to Matt Zinnecker loaded the bases, but Shepski wriggled out of trouble with a forceout at the plate and another at third.

"Bases loaded, it could have got out of hand," Shepski said. "But I knew all I had to do was let them put the ball in play and our defense would make the play every time."

"I have to give hats off to Shepski for staying calm out there and believing in the defense." St. Rita's Shane Peisker said.

In the bottom of the inning, Peisker helped bail out his pitcher.

With one out, Danny Gleaves singled and stole second. Peisker then singled him home for a 1-1 tie.

"I was struggling," Peisker said. "Hitting lefty (against) lefty (Downers South starter Danny Spinuzza) is not my favorite thing to do. But you gotta come through adversity."

There was more of that come.

After Peisker took second on the throw home, Downers South intentionally walked Shepski to set up a force. Peisker and Shepski pulled a double steal, leading to another intentional walk to Halas.

Nick Goldsmith hit a grounder to third baseman Kyle May, who threw home, and Peisker was called out on a close play.

"I'm still in disbelief on the play at the plate," St. Rita coach Mike Zunica said.

But then pinch runner Matt Murawski scored on a wild pitch for a 2-1 St. Rita lead and Shepski threw a 1-2-3 seventh for the win.

"It seems like we came out and thought we were going to beat them a little better," Shepski said. "I knew it was going to be a tight one."

"I loved them when we played them earlier in the season," he said. "I love the way those kids play. They were tough.

Watch more from this game on High School Cube