West Aurora junior Drake Spears attended a University of Illinois satellite camp at Maine South last Saturday and came away with a scholarship offer to the Big Ten program from coach Tim Beckman. 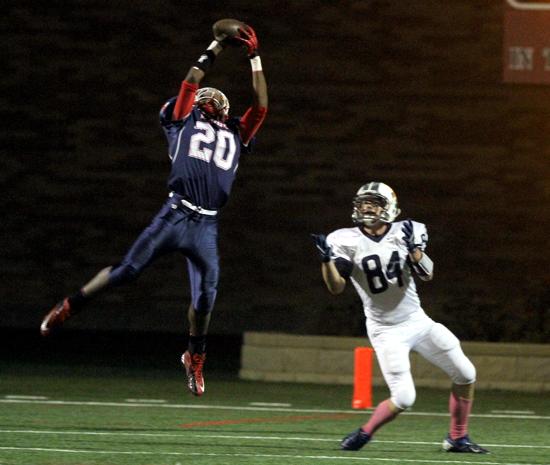 It’s only the beginning, but it’s quite a start for West Aurora’s Drake Spears.

The Blackhawks junior attended a University of Illinois satellite camp at Maine South last Saturday and came away with a scholarship offer to the Big Ten program from coach Tim Beckman.

“It was during the one-on-one drills,” Spears said. “(Beckman) came up to me, said I was a great athlete and I had a (scholarship) offer from them. I was surprised that I could get an offer now.”

It could be the first of many for the 6-1, 202-pound running back/defensive back who has put on about seven pounds since playing last fall as a sophomore on coach Nate Eimer’s varsity.

It was hard to tell who was more excited about the offer, the player or his coach.

“(Spears) must have impressed them,” Eimer said. “The Illinois coaches had told me if he does well (the offer) could be coming. They’ve been really active and have maintained good contact with us since checking out (graduated) Quintez Jones last year.

“That’s our first kid to get an early offer in my three years here. I was surprised. I thought maybe he’d get offered after his junior season.”

Eimer indicated the college coaches he’s talked to are looking at Spears as a potential safety.

The Illinois camp was the second in as many days for Spears, who was at Northwestern the day before.

“(Wildcat coaches) said they were gonna keep recruiting me and that they liked the way I’m headed,” said Spears, who has attended a couple games at Illinois and noted “it was more than I expected, just a great atmosphere.”

Spears was scheduled to attend a camp at Northern Illinois later this week. He said he’ll likely wait until his senior season before making a decision and commitment.

“He also runs track, but I call him a three-sport athlete because those guys start in January with indoor season and it goes so long,” Eimer said. “The other thing they like is that he’s a great student, too. His [grade-point average] is well above 3.0.”

The camps allow players to show off their skills to collegiate coaches.

“We had some stretching and then were timed in the 40-yard dash and pro shuttle,” he said. “Then we did some one-on-ones [receivers and defensive backs].”