Simeon basketball has taken many domestic trips over the years. This week coach Robert Smith and his players head to the Middle East for some international hoops flavor. 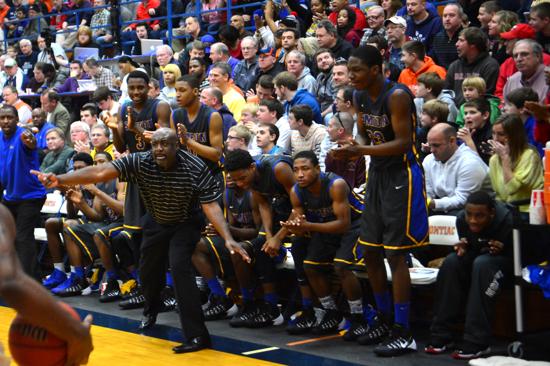 Simeon is one of a handful of teams from the United States that will participate in the MPAC Elite International Tournament in Dubai from June 15-25. | Patrick Gleason For Sun-Times Media

In 10 seasons under coach Robert Smith, with Division I players and high-profile stars being churned out regularly, Simeon has become a national program with multiple trips across the country over the past decade.

Now the state’s most successful program is set to go international.

Simeon will be one of a handful of teams from the United States leaving Thursday to participate in the MPAC Elite International Tournament in Dubai from June 15-25.

Dubai, the most populated city in the United Arab Emirates and located on the coast of the Persian Gulf some 7,000-plus miles from Chicago, will play host to an event that will attract teams from not only the United States, but from the Middle East and North Africa as well.

Among the teams joining Simeon in the UAE are Huntington Prep in West Virginia, Montverde Academy in Florida and Lone Peak in Utah.

Simeon has gone through proper channels, with the Illinois High School Association giving the Wolverines the green light to participate in this international event.

Smith still remembers the basketball trip he took overseas and the cultural experience he gained with his own Simeon teammates a little more than 25 years ago. In the late 1980s, Simeon coach Bob Hambric and his team spent two weeks traveling and playing games throughout the Netherlands.

“It was a once-in-a-lifetime opportunity for us and just a huge experience for me,” says Smith of playing and traveling in areas of Holland and in cities like Amsterdam while on the international basketball tour. “To be able to see and experience that and see a different part of the world at that age? That’s why I knew we had to take advantage of this opportunity for our kids here at Simeon.”

Simeon has had a number of travel experiences around the country as a team over the years, and Smith has witnessed the excitement his players share in those memory-making trips. But nothing Simeon has done as a program comes close or compares to this upcoming trip to Dubai.

“Our kids will be able to see and experience a completely different culture and way of life,” says Smith. “We’ve already spent time looking into some of the history in the area, talked about the culture to try and at least get a little familiar with the expectations there.”

Simeon senior-to-be D.J. Williams said his first reaction was “wow” when he first heard the news the Wolverines would be headed to the Middle East. As Smith indicated, Williams and his teammates are trying to get familiar with the customs and culture in the region.

“It will be a completely different environment, rules and culture,” Williams points out. “You can’t show tattoos or wear tank-tops. I’ve never been out of the country before, so this will be an entirely new and different experience. I’ve been looking forward to this trip since I first heard we were going.”

Interestingly, former UIC basketball player Ebenezer Noonoo, who played for the Flames from 2005-2008, has played an integral part of organizing the event. Noonoo works with MPAC Sports, a grassroots basketball-development program in the North Africa and Middle East region. MPAC Sports launched an initiative to develop basketball in the emerging market of the UAE.

“This is also a chance for our kids to see how far basketball has spread, how it’s become a global game, and to see a different style of basketball there,” Smith adds.

Simeon, which just recently won the Riverside-Brookfield Shootout, will be one of the favorites this season to capture a state championship, which would be an unprecedented eighth state title in the program’s history.

“I also think it will help us develop chemistry and bring us together as a team,” says Williams. "The trip will be memorable."

Loyola Ramblers offer Robbie Avila of Oak Forest, a skilled 6-8 big man and one of the top 10 prospects in the Class of 2022.

Are all offers legit? "I told a family to take it, to take the offer from the high-major right there on the spot… https://t.co/sOVVwRKinI

Are all scholarship offers the same? Are they all legit and genuine? Can every prospect who receives one commit on… https://t.co/TblpPDyaCh

One of the country’s top 30 prospects and the No. 2 prospect in Illinois commits to #Kentucky. Fenwick’s Bryce Hop… https://t.co/SYNH7Nkbha

RT @michaelsobrien: JUST IN: Fenwick senior Bryce Hopkins commits to Kentucky. “When they offered it was a bit of a dream come true. As a…