Bartlett’s Mike Gulczynski chose to serve the United States rather than a volleyball. 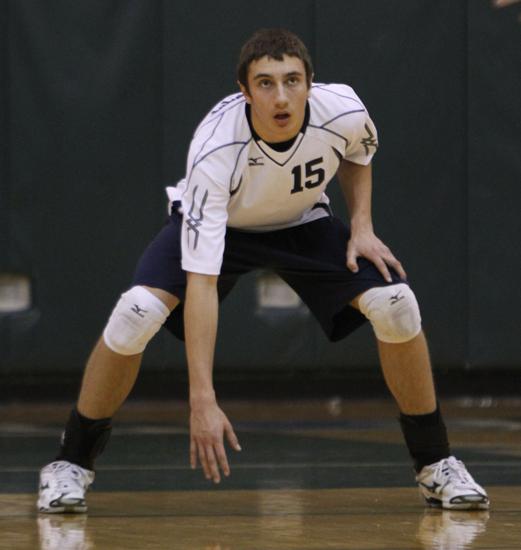 Bartlett’s Mike Gulczynski chose to serve the United States rather than serve a volleyball.

The 6-5 1/2 standout hitter signed a letter of intent for a volleyball scholarship with NCAA Division I champion Loyola next year, but has decided to give it back so he can attend West Point.

“It’s a hard decision seeing as how they just won a national championship and three days after it I decommitted,” Gulczynski said. “It’s very difficult to leave a sport I love, but I feel like I’m moving on to do bigger things with a higher purpose in life.”

Gulczynski is making a 10- to 14-year commitment. He will first go for a year to the Marion Military Institute, where he can still play volleyball. At West Point, his volleyball will be confined to a club level since there is no varsity NCAA team. Then he’ll have five years military service, followed by four years in the reserve.

“The decision kind of blindsided me and everybody else and it was a pretty emotional time for our program,” Bartlett volleyball coach Robert Schwantz said. “All the guys looked at it as, ‘Wow, what an amazing decision — entirely selfless.’

The three-time All-Upstate Eight Conference player finished a year where he tallied 373 kills, 49 percent of the team’s total kills.

“When he was a sophomore I remember his father telling me to just have the setter set it up as high as possible and he’ll go up and get it,” Schwantz said. “He was such a strong hitter. He could leap and touch about 12 feet.”

Although the decision surprised some, it wasn’t completely out of the blue.

“I’ve been trying to get in there to West Point for two years,” Gulczynski said. “My family history has influenced me.

“I’m the fourth generation of my family to go into the U.S. Army and it has been a major goal of mine. The opportunity to be an officer in the U.S. Army has always appealed to me.”

Gulczynski may be fourth-generation U.S. Army but he’s not the first from his generation to serve.

His brother, Private First Class Lenny Gulczynski, died in Iraq on Sept. 17, 2008, when his Army Humvee collided with a civilian vehicle. At the time, he was helping rebuild the country’s infrastructure.

Lenny also played volleyball at Bartlett and the 6-5 middle hitter earned a Division II volleyball scholarship offer before opting for the military. Mike wore his brother’s jersey No. 15 in matches, and during a ceremony this season the jersey was retired at a ceremony involving Mike’s father, Mike Sr., and his mother, Jackie.

“It was a very emotional and moving experience for myself and my whole family,” Mike Gulczynski said. “It meant a lot that Bartlett would honor me to be the last one to wear No. 15 and that they honored Lenny.”

The death of his brother was something Gulczynski said he had to ponder while deciding whether to pursue the military.

“I have no qualms,” he said. “If anything, his being in the military reinforced my decision.”

While Gulczynski called his decision the right one for him, it didn’t make breaking the news easier — particularly to Loyola.

“I wanted to wait until after the national tournament was over to tell them,” he said. “Of course, then they won.

“I’ve enjoyed playing volleyball for Bartlett and for my club, although we had some tough seasons. Overall it was a great experience.”

Now it’s on to answer a calling.