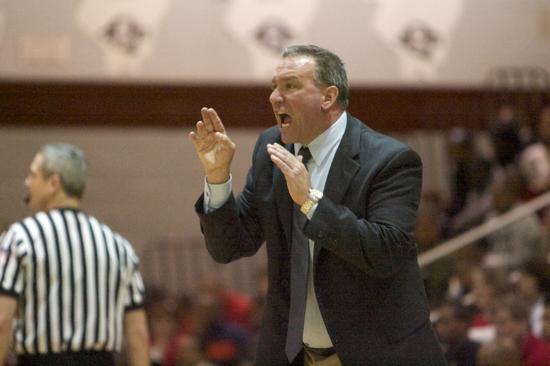 Tim Bowen will be the first to tell you that he really enjoyed coaching his son Lee during the 2013-2014 boys basketball season at Carmel.

Come November, we’ll see how Tim feels about coaching against his son.

On Wednesday, Bowen confirmed that he’s accepted the position as varsity basketball coach at Guerin.

In his four years at Carmel, Bowen’s teams compiled a 61-56 record, including back-to-back appearances in the Round of 16 of the Class 3A state playoffs. His 2012-2013 team went 15-14 and was the first Carmel team to finish a season with a winning record in a generation, and last year’s Corsairs set a school record with a 25-win season.

On last year’s team, Carmel’s backup point guard was Lee Bowen, who figured to move into a starting spot this coming winter.

Now, Lee has enrolled at the public school in his hometown and will attend Grayslake North for his senior year.

This winter, Guerin opens its basketball season in the Johnsburg-Richmond Thanksgiving-week tournament, and the very first game scheduled that week at Johnsburg is — you guessed it — Guerin vs. Grayslake North.

Tim said on Wednesday that Lee enrolled that morning at Grayslake North, and was thrilled to be back in a school with friends he played sports with during his grade-school years.

But there’s no way Lee could be happier than his dad, who built a winning hoops program at Grayslake Central (2000-2007), did it again at Carmel, and now tries for the “triple crown” by pumping life into the struggling Guerin program.

Bowen, who was not invited back after four seasons at Carmel, will be replacing Kevan Zaffaroni who was 8-19 in his only season heading the Gators.

In many ways, Guerin’s basketball program parallels what Carmel was doing before Bowen’s arrival.

In the last six seasons, the Gators have won 35 total games under three different coaches.

Bowen interviewed for the Guerin job recently, and one of the people instrumental in bringing him to the school is Glen Kozlowski.

Kozlowski, who coached football at Wauconda and North Chicago, was named Guerin’s football coach last winter. He was hired to pump life into a program that’s been a bottom-feeder for years.

That led to a search for a basketball coach who is a proven winner, with Bowen fitting that description.

“We (he and Kozlowski) have a lot of similarities,” Bowen said. “Ultimately, our goal is to make wherever we’re at better and do whatever’s best for the kids. We work really hard at that.”

Bowen said he will remain a teacher at Grayslake Central and will make the 45-minute drive each day.

Bowen said he’s been aware of Guerin for more than a few years, though he hadn’t pursued a job there before.

Back in 2006, Bowen’s Grayslake Central team was supposed to play North Chicago in the Class 3A sectional finals, but Guerin derailed that plan by upsetting Grayslake in the sectional semis.

“I kind of knew then there was potential for talent to come there,” Bowen said.

For basketball tournament purposes, Guerin is a Class 2A school, and there are no 2A schools in Lake County.