Montini's Austin Kline is a player for all positions

Hinsdale resident Austin Kline, whose played virtually every position during his career at Montini, ended his career at third base. 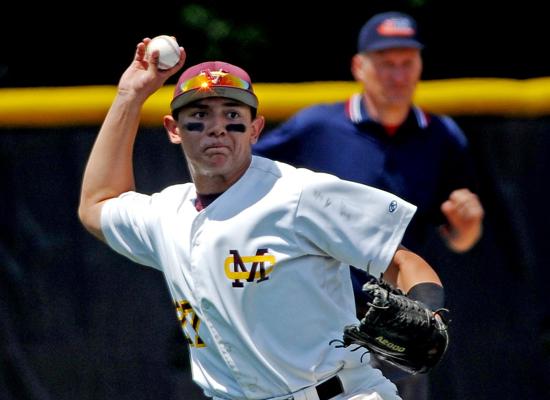 Austin Kline never thought about playing nine different positions in a single baseball game, but he would be a perfect candidate for the feat.

Kline played nearly every position, except pitcher, during his four-year career at Montini, including three years on the varsity. The Hinsdale resident started out as an outfielder for the Broncos as a sophomore and since then played every infield position for coach Bob Landi.

Kline plans to play next season as a third baseman or catcher at Brunswick Community College in Bolivia, North Carolina, near the South Carolina border. He has family from there: His father, Michael Kline, is from Maryland and his grandmother still lives there.

“I like to move everywhere; just to be versatile in general,” Kline said. “It’s always exciting. It’s nice to see different reads at different positions. You get a different aspect. I love playing every position.”

At least four major-league players have played nine different positions in a single game, including the Athletics’ Bert Campaneris and the Twins’ Cesar Tovar in the 1960s.  The most positions Kline played in one high school game was four: right field, third base, shortstop and second base.

“He’s never pitched, but he’s capable of playing anywhere,” Landi said. “It’s obvious, because he can hit [.369 career average at Montini]. I have not seen a pitcher that Austin Kline couldn’t hit.”

Landi believes Kline played at least 100 games at Montini. In his final game on Saturday, he and the third-seeded Broncos (23-10) lost 6-2 to seventh-seeded Fenwick (25-10) in the Class 3A Glenbard South Sectional final.

Kline went 0-for-1 batting cleanup. He walked in the first inning, but was stranded at third base after the Broncos scored twice. He flew out to right field in the third and hit into a fielder’s choice in the sixth.

Montini, which won 14-of-15 games to start the season, was attempting to capture its fourth sectional title in school history, while the Friars secured their first.

“My whole [high school] experience in general, was a great one,” Kline said. “My favorite moment all through high school was our Senior Game when we came back in the bottom of the seventh down one run.”

Kline attended Hinsdale Middle School and played for the Downers Grove Nomads seventh-grade travel basketball team. He decided to follow some of his basketball teammates to Montini, but never played varsity basketball there. After playing on lower level teams as a freshman and sophomore, Klein began to focus on baseball.

The last four offseasons, he’s played on Team MaxBat out of Minnesota, with players from Minnesota, Illinois, Georgia and Florida. During the winter, Kline regularly participated in tournaments in Florida and Arizona. He used to leave school on Friday, fly out of Midway to join his team, then return to school on Monday.

This summer, Kline passed his tryout with Team Illinois and plans to play in his first tournament from June 19-23 in the Battle of Omaha (Nebraska). Kline will join Team Illinois for other tournaments this summer in Kentucky and in Arizona.