East Aurora's Demond Gant recently signed for a football scholarship at the University of Minnesota and will begin taking classes later this month. 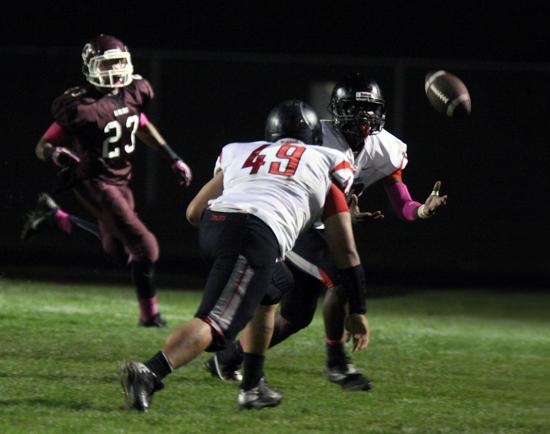 Ask Desmond Gant and the recent East Aurora High School graduate could probably help you with the translation of the French phrase above.

All things come to him who waits.

He would likely be quick to add “and works and studies hard” to the end of it, however. That’s what it took for the Tomcats standout in football and track to realize his dream.

He recently signed for a football scholarship at the University of Minnesota and will begin taking classes later this month in summer session.

Gant had to wait until after graduation to make sure he made it through the NCAA clearinghouse to be eligible before signing with the Gophers and coach Jerry Kill.

That’s part of the reason he decided to forego a senior year of basketball.

“I wanted to conserve my legs for track and I didn’t want to risk any type of injuries so I did what was best for me,” Gant said. “It was also to devote time to academics. Basketball is really hectic. I just wanted to focus on that so I would have a better chance of earning a scholarship.

“Coach (Kurt) Becker always told me he was gonna get me into school. He told me he could do it, but sometimes I had doubts in myself.”

In the classroom, it was Kathryn Hvala’s French class that gave him fits.

“It was, by far, the hardest for me,” he said. “It took a lot of days of me coming in after school, before school and devoting a lot of time to it, but it was really worth it.

“Some days I wouldn’t like it and she’d come hunt me down in the middle of the school day and I was like, ‘Here comes this lady.’ At the end, I really appreciate her for not giving up on me and still helping me out.”

An honorable mention Class 8A All-State defensive back (41 tackles) who also played wide receiver (3 TDs) and returned kicks (3 TDs) for the Tomcats, Gant caught the attention of Kill and his staff at a one-day camp last summer.

“He’s a hard-nosed coach,” Gant said of Kill, who sees the athletic 6-foot-3, 200-pounder as a wideout and possible return man. “It seems like he’ll keep me on task. He’s a no-BS type person and I like that.

“Going up there I was nervous. I was trying to be really cool on the outside but I was really nervous. There were 400 kids there and I had to go with that mindset that nobody could stop me and I had to earn it.”

After his mother moved to Bolingbrook, he spent the past year living with his grandfather, a retired Cook County sheriff’s deputy who lives in Aurora, Elbert Gant.

“My grandpa helped me through the whole process, academics, (offseason) training, everything,” the youngster said. “I’m real close to him and can talk to him about anything.”

“There was a big involvement from his coaches, counselors and teachers,” he said. “They placed a great deal of emphasis on the important things and not just talked about it but did the actual time with him. … and Desmond truly worked hard, too.”

It’s all part of the foundation being laid by Becker, Desmond Gant said.

“Everybody knows that when Coach Becker says he’s gonna do something, he’s gonna come through,” Gant said. “He’s really changed this program, the whole culture, him and the whole staff.

“And that’s the way I see coach Kill. He’s kinda like a college version of coach Kill, turning that program around.”