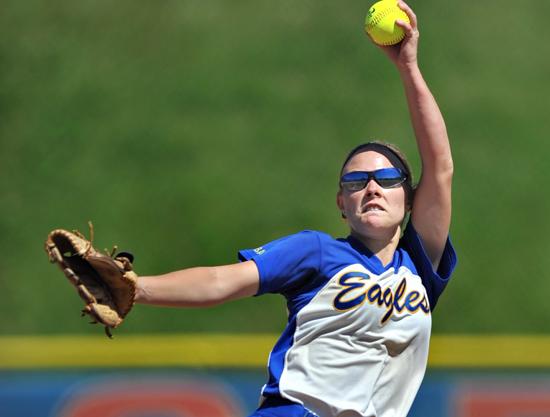 Sandburg pitcher Sarah Herold gave up four hits, struck out six and walked one, and also added three hits of her own in the Eagles 5-1 win over Lincoln-Way East. | Jon Cunningham/For Sun-Times Media

“I had a dream about the fourth inning and I said ‘no way is that happening again’,” Herold said.

That nightmarish fourth inning had happened in the second meeting between the two teams when Herold got knocked around and eventually taken out of the game. But on Friday the Griffins went down in order in the fourth and Herold pitched a masterful complete-game 5-1 win.

The Eagles (24-15) advance to Saturday’s state title game against the winner of Warren vs. Glenbard North. They won their only state softball title in 2010 under current coach Jim Fabianski.

“I’m so excited about these girls making the commitment to change the outcome of our season from last year [when losing in the supersectional],” Fabianski said. “Herold made all the pitches she had to make at the right time.”

Herold gave up four hits, struck out six and walked one, and also added three hits of her own. The only run was unearned in the fifth and came on an RBI single by Alana Selvaggio bringing home Nicole O’Donnell (walk).

“My pitching coach [Tamara Lagesse] told me all I had to do was spin the ball and not to try to throw it past anybody and that’s what I did and that really calmed me down today,” Herold said.

The Eagles put up two runs in the first on RBI singles by Katie Krzus (3-for-4, home run, four RBI) and Karli McLaughlin. Krzus accounted for the next three runs with an RBI single in the fourth and a two-run home run in the sixth —  her seventh of the season.

“We knew what they were going to throw from experience so in practice we kept practicing against those pitches,” Krzus said. “So we got really used to that and it really paid off.

“We all love each other and we don’t want to stop playing together.”

Devon Morgan had two of the four hits for the Griffins (27-11), who will play in the third-place game Saturday.

“This says something about our conference that we’ll have two teams in the Top Four,” Lincoln-Way East coach Elizabeth Pawlicki said. “I think [Sarah] did a great job keeping us off balance. We’re very proud of our girls and we’re excited to play tomorrow.”