Eagles’ unflappability has team poised to take 4A title. 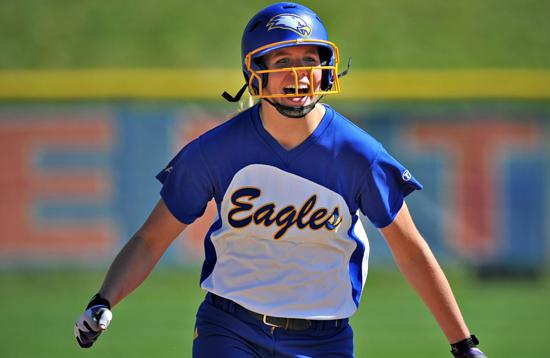 EAST PEORIA, Ill. — Sandburg had a lot of things go right in its Class 4A state semifinal game Friday against Lincoln-Way East at EastSide Centre.

The Eagles had some aggressive hitting by Bri Soltis, Sarah Herold, Katie Krzus and Karli McLaughlin that led to early runs.

They had three highlight-reel catches by Maddie Hanley, Kristen Zarate and Soltis.

But if there was one important thing that carried the Eagles over the top in the 5-1 victory, it was keeping their cool.

There were several points where they could have cracked and didn’t. Let us count the ways.

Keeping their cool was as simple as third baseman Brooke Heimerl knocking down a sixth-inning rocket grounder by East’s Eleni Kioussis, focusing on the ball as it lay at her feet, and picking it up and throwing a dart to Krzus at first.

“When I saw the ball hit as hard as it was I just wanted to get in front of it and knock it down,” Heimerl said. “Once I saw it in front of me I knew I was going to throw her out. If you keep calm, keep control, you can make a play out of it.”

Cierra Adamus made the heads-up play of the day after East scored a run in the top of the fifth. With runners on first and third and two outs, she took a throw from catcher McLaughlin and calmly, coolly, but quickly worked a 2-6-3 putout of one runner before the other was able to cross the plate.

“There really is no thinking about that,” Adamus said with a smile. “When I think too much I make errors. I’ve been thinking about this all trip how we need to stay composed. That play, when you get the ball, as soon as you get it you do exactly what you need to do.”

Then there was the Queen of Cool in the pitching circle, Herold.

In her first outing against the Griffins she beat them 3-1. In her second outing she was KO’d in a seven-run East fourth inning.

Friday she had the proverbial ice in her veins.

Let’s start with a weird coincidence.

In the first meeting between the teams, Herold hit the first batter before striking out the next two and going on to record 13 strikeouts.

Friday she hit East leadoff batter Olivia Prieto, but struck out the next two batters. She hit the following batter, but was bailed out when McLaughlin coolly picked Prieto off second.

East again would score just one run against Herold (her first earned run allowed in the postseason). This time she finished with just six strikeouts but was consistently ahead in the count. She walked just one.

She never once looked shaken. Why should she be with everyone behind her keeping their cool?

“I would say that besides talent, mental is probably more than half of the game,” Herold said. “My whole pitching career … I remember games where I was like, ‘Wow, they just got two hits off of me. What am I gonna do?’ And then I’d end up panicking and we’d lose.

“But as I got older, up to senior year, especially after the Marist [sectional] game last year with bases loaded, I have this kind of cool feeling inside, like I know my team is going to be there. In this postseason they have been there. They haven’t let me down.”