Warren shuts down Sandburg for Class 4A title

After going unnoticed most of the season, Warren took down Sandburg 8-4 on Saturday for the Class 4A state title. 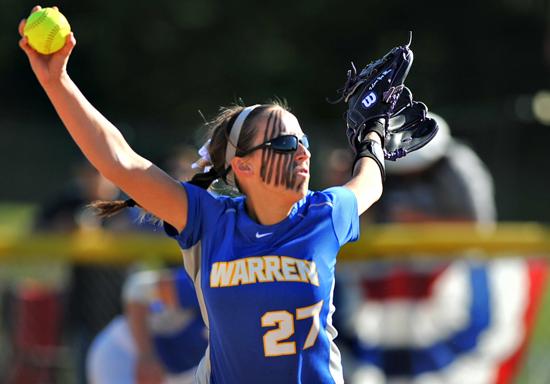 EAST PEORIA, Ill. — If first-year coach Bryan McNulty was trying to keep Warren off the radar this season, he did a pretty good job of it early.

The Blue Devils started 9-6 and lost three in a row on two occasions.

People sure know the Blue Devils now after they defeated Sandburg 8-4 in the Class 4A state final at EastSide Centre on Saturday.

“I believe the difference-maker for us was our offseason training program,” said McNulty, who had been in the program for six years prior to taking over as coach.  “These kids come in so skilled. Their travel coaches do such a great job with them. Mentally our weight program kept us in the right shape.”

The Blue Devils (28-9) made their first appearance to state since 1980. The Eagles (24-16), after winning a state title in 2010, place for the ninth time in program history and the third time in Jim Fabianski’s ninth season in Orland Park.

The Blue Devils took a 2-0 lead in the second on a two-run double by Crystal Pennell (2-for-4) against Sandburg starter Sarah Herold. The Eagles answered in the fourth with a three-spot highlighted by an RBI single by Kristen Zarate, a throwing error by right fielder Pennell and a perfectly executed squeeze by Cierra Adamus bringing home Zarate for a 3-2 Eagles’ lead.

Emily Griskell (5-4) relieved Herold in the top of the third and pitched two shoutout innings until the fifth when the Blue Devils plated two on an RBI single by Megan Scott and a throwing error scoring Michelle Vasen (2-for-5). A diving play up the middle by shortstop Adamus kept the Eagles within 4-3.

The Blue Devils scored three more in the sixth on an error and four hits highlighted by a two-run single by Rachele Belletini.

“Right from the get go they were putting the bat on the ball with [Herold],” Fabianski said. “On our team we just don’t have one pitcher. So that’s why we made the move.”

Blue Devils starter Jana Wagner (16-3) went the distance, striking out three and giving up eight hits. Amber Leneau (2-for-4) iced the game with her first-ever home run at any level in the top of the seventh. Jazmin Bonke was 3-for-4 with a sacrifice bunt for the Blue Devils.

“I knew the team had potential since we were a different type of team from last year,” said Wagner, who will play at Palm Beach Atlantic in Florida next Fall. “We never dwelled on losses from the start -- we knew we would eventually pull it out.”

The Eagles entered the playoffs with an 18-15 record and would have tied Marist (2012) with the most losses by a state champion if the result was different. They had one of the toughest roads to the state recording playoff wins over Mother McAuley, Marist, Naperville Central, and Lincoln-Way East.

Briana Soltis had a triple and an RBI for the Eagles, Madeline Hanley and Griskell added a double, and  Karli McLaughlin was 2-for-3.
“To be honest I think the Lincoln-Way East sectional was tougher,” Fabianski said. “I thought because of the tough rode we had that we had a real good shot of winning this.”