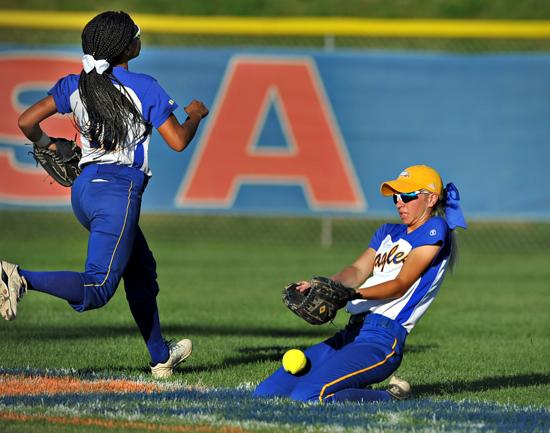 Sandburg center fielder Caroline Kuzel does her best to corral a ball that dropped in between her and shortstop Cierra Adamus (left). | Jon Cunningham/For Sun-Times Media

EAST PEORIA, Ill. — If a couple of pitches don’t get away.

If the ball sticks in a glove.

If the wind wasn’t blowing in so hard.

If, if and if, perhaps Sandburg’s postseason fairy-tale story would have had a fairy-tale ending Saturday at EastSide Centre.

Eagles coach Jim Fabianski pretty much dismissed the ifs after the 8-4 loss. Instead, he painted a picture of reality — and superiority.

“I just think that [Warren] came here on a mission,” he said. “I thought we were, too, but you know what? [Saturday] they were too much for us.”

More about that shortly, but let’s talk about the ifs, anyway.

Eagles ace Sarah Herold came into the game on one of the hottest streaks any pitcher had ever experienced in a state playoffs.

Through the first six games, the senior lefty had given up exactly zero earned runs. She got through a shaky first inning against Warren, but in the second inning hit two batters, the second of which came on a changeup that gently plunked the batter in the helmet.

Crystal Pennell followed with a two-run double for Warren, but Herold got the next two batters on groundouts to shortstop Cierra Adamus.

Fabianski, not liking what he was seeing, pulled Herold in favor of Emily Griskell, who had been a late-inning relief hero in two playoff games.

Griskell held the fort for two innings, but wound up getting batted around pretty good over the final three by Warren’s up-and-down potent lineup.

Then there’s that slippery ball.

Sandburg fought back from the 2-0 deficit and went in front 3-2 in the fourth thanks to some key hits Maddie Hanley and Karli McLaughlin and one really bad misplay by Warren.

The Blue Devils’ Jazmin Banke opened the fifth by hitting a spinning soft liner toward third. Brooke Heimerl alertly broke for the ball and made the scoop catch, but when she went to the ground the ball squirted out of her glove. Warren went on to score two runs and retake the lead.

If the ball stays in Heimerl’s glove, who knows what happens?

And then that wind.

It was blowing in at a very brisk rate. In the second inning, Griskell crushed a ball to left that was hauled in at the warning track. In the fourth Katie Krzus sent the center fielder back to the fence. In the fifth it was the right fielder that hauled in another monster blast by Krzus.

If the wind was blowing out like it was on Friday, who knows what happens?

It was really kind of refreshing, though, to mention the ifs to those wearing Sandburg uniforms and find them, at the worst, just shrugging their shoulders.

“You can’t just blame the wind,” Krzus said. “Everything factors in. Like they had really good hitters that were just finding the gaps. And we were hitting their pitcher good, but we couldn’t find the gaps. That’s what makes the difference in the game.”

That and, yeah, what Fabianski said when asked about the tough turn of events following Sandburg’s mid-game surge.

“That’s the sign of a really good team and a team that belongs in the state championship,” he said of Warren. “When we came back in the fashion that we did after they made some errors, they just fired back with hits and just kept right on hitting the ball. My hat’s off to them.”